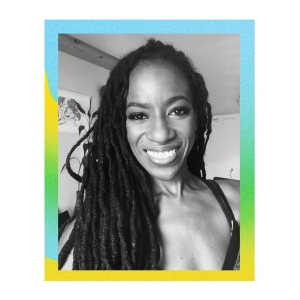 MAKEDA THOMAS is a New York/Port of Spain based dance artist and founding director of the Dance and Performance Institute, Trinidad and Tobago, which marks its 10th Anniversary in 2020. Interdisciplinary in nature, her artistic practice, scholarship and teaching are situated at the intersection of performance practice, diaspora theory, dance studies, ethnography and black feminisms. She has presented intermedia performances in relation to her scholarship internationally, including at the Brooklyn Museum of Art, New York Live Arts, HARLEM Stage/Aaron Davis Hall, Teatro Africa, the National Gallery of Zimbabwe, CCA7, and Mexico’s Teatro de la Ciudad, with awards from Creative Capital, Mid-Atlantic Arts Foundation, and 651 ARTS, among others. Thomas’ work is published in “Curating Live Arts: Critical Perspectives, Essays, and Conversations on Theory and Practice” and in Small Axe: A Caribbean Platform for Criticism. Thomas serves on the founding Board of the Collegium for African Diasporic Dance.