The inaugural edition of the Caribbean-driven visual arts conference Tilting Axis took place in 2015 at The Fresh Milk Art Platform Inc. in Barbados. This initial encounter saw thirty-two arts professionals spanning the Anglophone, Francophone, Hispanic and Dutch Caribbean convene for the first time on Caribbean soil alongside a number of international participants. Building on this, Tilting Axis 2 took place at the Pérez Art Museum Miami (PAMM) on February 19 and 20, 2016, with more than double the previous number of attendees coming together to discuss this year’s topic ‘Caribbean Strategies’.

Tilting Axis was originally conceived by Fresh Milk and ARC Magazine, who have continued to collaborate with core partners Res Artis and PAMM for the second iteration in Miami. As a city that not only aspires to be a vital art centre in the 21st century, but that also acts as a hub between the Caribbean and the global North with a large diasporic population and, in many ways, a shared history, Miami was a strategic location for the conference to travel to.

The participants of Tilting Axis 2

Veerle Poupeye’s presentation about the National Gallery of Jamaica

Adler Guerrier presenting about his art practice at Tilting Axis 2

At the invitation of Videobrasil’s director, Solange Farkas, the core organizations of Tilting Axis — The Fresh Milk Art Platform Inc, ARC Magazine and the Pérez Art Museum Miami — had the opportunity to participate in the Public Programme at the 19th Sesc_Festival in Sao Paulo on October 8, 2015. 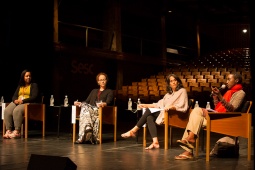 The inaugural two-day conference ‘Tilting Axis: Within and Beyond the Caribbean – Shifting Models of Sustainability and Connectivity’ was held at The Fresh Milk Art Platform, Barbados on February 27-28, 2015. This meeting aimed to promote greater conversations and engagement between artists and professionals working within artist-led initiatives across the wider Caribbean region, build and redefine historical relationships with those in the North, and establish open dialogue with active networks emerging in the Global South.

Organized by Fresh Milk, ARC Inc., Res Artis and Pérez Art Museum Miami, Tilting Axis saw the founders/directors of several of the region’s artist-led initiatives coming together to engage in face to face conversations, along with a number of professionals from outside the region interested in working with Caribbean based initiatives.

The objectives of the two-day engagement were to:

● Create opportunities for more integration, awareness, and collaborations to take place across the Caribbean and between international foundations, cultural organizations, and practitioners;
● Enable local, regional, and international artist networks to reflect on lessons learned and share best practices, methodologies, and ideas;
● Develop an action plan for continued collaboration and for moving the Caribbean out of a peripheral position in the global art conversation. 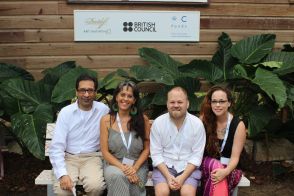 Participants of the Tilting Axis 2015 conference. All photographs by Sammy Davis. 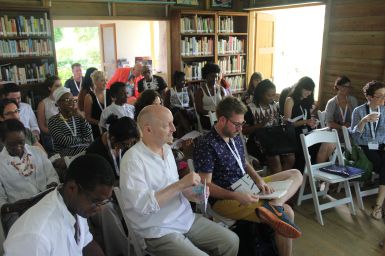 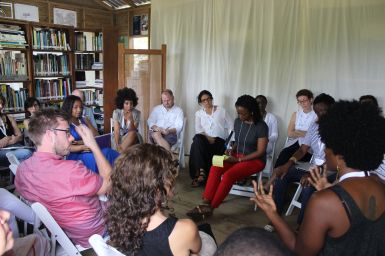 Read the full reports from the participants in the inaugural Tilting Axis conference here.