The inaugural edition of the Caribbean-driven visual arts conference Tilting Axis took place last year at The Fresh Milk Art Platform Inc. in Barbados. This initial encounter saw thirty-two arts professionals spanning the Anglophone, Francophone, Hispanic and Dutch Caribbean convene for the first time on Caribbean soil alongside a number of international participants. Building on this, Tilting Axis 2 took place at the Pérez Art Museum Miami (PAMM) on February 19 and 20, 2016, with more than double the previous number of attendees coming together to discuss this year’s topic ‘Caribbean Strategies’.

Tilting Axis was originally conceived by Fresh Milk and ARC Magazine, who have continued to collaborate with core partners Res Artis and PAMM for the second iteration in Miami. As a city that not only aspires to be a vital art centre in the 21st century, but that also acts as a hub between the Caribbean and the global North with a large diasporic population and, in many ways, a shared history, Miami was a strategic location for the conference to travel to. 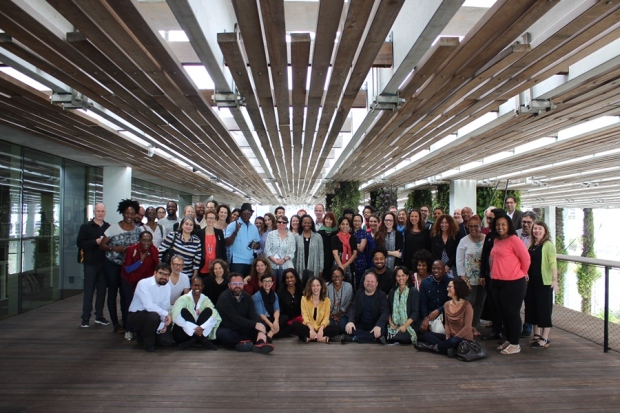 The participants of Tilting Axis 2

In her introductory remarks, Annalee Davis, Founding Director of Fresh Milk, emphasized the value of the first meeting having taken place within the region: “This notion of ‘tilting the axis’ refers to shifting the focus of our gaze and harnessing our collective power to make this sector more visible and sustainable in ways that resonate with our lived realities in the Caribbean.”

Although this concurrent gathering happened physically in the USA, it is critical that the heart of Tilting Axis and the commitments made by all those in attendance continue to act “as a counterpoint to many decisions often made about the region from external locations.”

Holly Bynoe, Director and Editor-in-Chief of ARC, reiterated these sentiments, and expressed thanks to the team at PAMM for facilitating a larger conference and making the museum’s network and resources available to the region: “As we work to make new connections with individuals and entities who want to work with the creative Caribbean, figure out our best practices and become more regionally conscious, projects like Tilting Axis can become one of the fertile seeds of this transformation.” 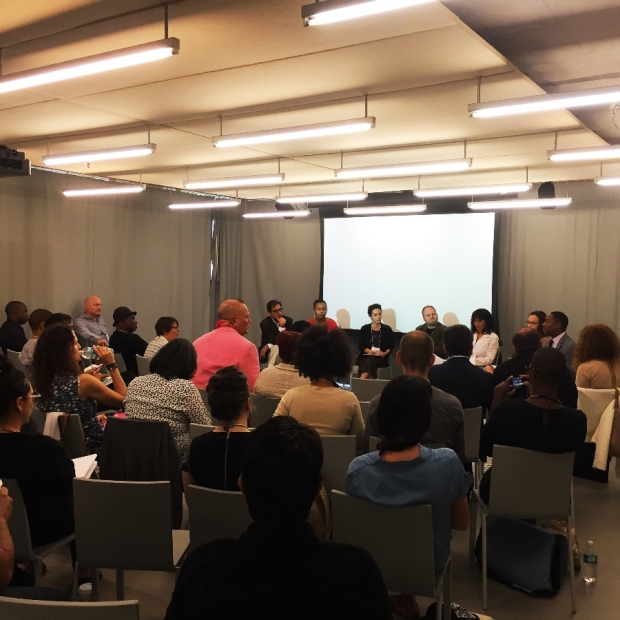 Tilting Axis 2 was anchored by three modules that emerged from the first meeting: exhibitions and programming, artists’ movement and mobility, and education. Table 1 on Exhibitions and Programming was moderated by Holly Bynoe, and looked at curatorial projects that reimagine tropes of the Caribbean. The three presenters were Veerle Poupeye, Director of the National Gallery of Jamaica (NGJ); Art Historian at Northwestern University Krista Thompson; and Johanna Auguiac-Célénice, Director of the Biennale Internationale d’Art Contemporain Martinique (BIAC-Martinique).

Poupeye highlighted the shift in the NGJ’s approach to curating from “teaching a lesson to encouraging conversations,” giving examples of exhibitions the gallery has held in recent years. Thompson spoke about the increasing interest in Caribbean art over the last decade, and how her curatorial projects seek to counter the often monolithic view of the region. Through her work at the BIAC, Auguiac-Célénice expressed the need for us to think about Caribbean culture differently, embracing our differences and favouring a rhizomatic system over hierarchy.

Veerle Poupeye’s presentation about the National Gallery of Jamaica

Table 2 addressed Artists’ Movement and Mobility, and was moderated by Tobias Ostrander, Chief Curator of PAMM. Presentations were given by Joëlle Ferly, Director of L’Artocarpe in Guadeloupe and Marcel Pinas, Founder of Tembe Art Studio in Suriname about their respective platforms, experimental approaches to residencies and issues in the mobility of artists working in and from the Caribbean. Both speakers see their organizations as fulfilling a necessary role in their countries, with Pinas’ sharing his strong stance on using the arts as a way to generate “awareness and value of ourselves and our culture,” and give back to the community.

Moreno discussed the alternate education programming of research.art.dialogue (r.a.d.) in terms of mapping a variety of learning structures and advocating for non-traditional methodologies of knowledge exchange. Guardiola spoke about the importance of alternate education in the arts co-existing alongside cultural institutions and schools to ensure a breadth of experience for students. Beginning his presentation by giving a background in Brazilian art, Miyada went on to outline the Entropic School’s vision of being a space of experimentation and addressed the gap between formal art education and professional placement in Brazil.

Open clinics were held to determine how attendees could realistically use the range of skills and knowledge at the conference to commit to a series of actions around the three target areas. Some of these included co-creating educational programmes; the potential of forming an advocacy group to liaise with governments on behalf of artists; initiating residencies and exchanges between a broad spectrum of cultural professionals; and designing an exhibition programme which could happen simultaneously in a number of territories, while having scholarship on the exhibitions written from within the region and disseminated widely.

Also built into the two-day conference were three ‘artist intermissions’, featuring short presentations by Haitian-born, Miami based artist Adler Guerrier, Bahamian-born, London-based artist Blue Curry and St. Martin-born, Martinique based artist David Gumbs. Interspersing the dialogues with opportunities to see what a few artists connected to the region are producing created a space for rejuvenation and inspiration. Along this same vein, a group visit was organized to Cannonball Studios, where Blue Curry and ARC Magazine’s Senior Arts Writer Marsha Pearce had been taking part in a residency leading up to the meeting.

Adler Guerrier presenting about his art practice at Tilting Axis 2

The closing event of the conference was a public talk given by Pablo León de la Barra, a curator at the Solomon R. Guggenheim Museum for the Latin American phase of the Guggenheim UBS MAP Global Art Initiative. His presentation examined the structure and function of museums in contemporary society. León de la Barra discussed some of his curatorial work which explores different ways of creating agency and visibility for cultures that are often erased from the established canon of art history.

Overall, Tilting Axis 2: Caribbean Strategies made significant strides in its aims to fortify networks through knowledge transfer, provide avenues for critical conversation and form action plans to extend the reach of arts and culture throughout the Caribbean. The next edition of the meeting is slated to take place in early 2017, hosted by the National Gallery of the Cayman Islands (NGCI).

To find out more about the organising institutions and funders visit the ARC, Fresh Milk, PAMM and Res Artis websites.