In order to put Fresh Milk into the public arena and generate interest in what Barbadian & Caribbean artists are producing, we support a number of creative outreach projects. Our public gallery the Fresh Milk ArtBoard, located in a field of cows on the outskirts of the active dairy farm that houses Fresh Milk, rotates new commissioned artworks by regional artists.

Take a look at the work by the artists below: 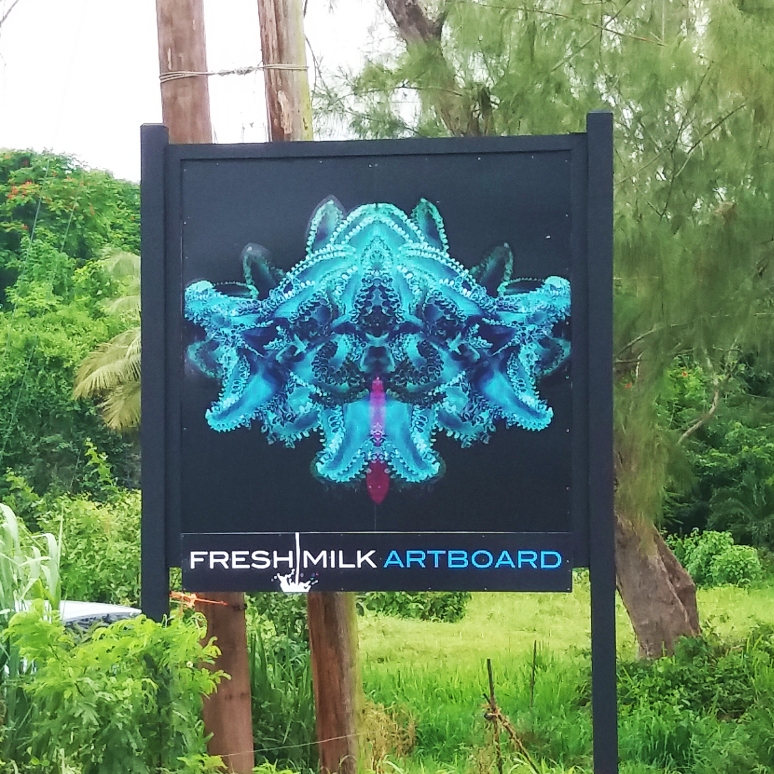 David Gumbs is a multimedia artist from the island of Saint-Martin. His research investigates the spectator’s perception and mental landscape.

David Gumbs’ artistic approach is based on a famous quotation from XVIIth century French philosopher and chemist Antoine Lavoisier: « Mass is neither gained nor lost, merely transformed ». Thus, life’s cycle, infinite scale, memory, and the Sacred, are themes that emerge from larger topics of interest such as inner/outer landscape, and offscreen. These immersed spaces reveal personal inner projections from the unconscious, thus emerging this « Mental Archeology » through spectator’s perception. His research focuses on the different feelings, emotions, and stimulations that build memory. 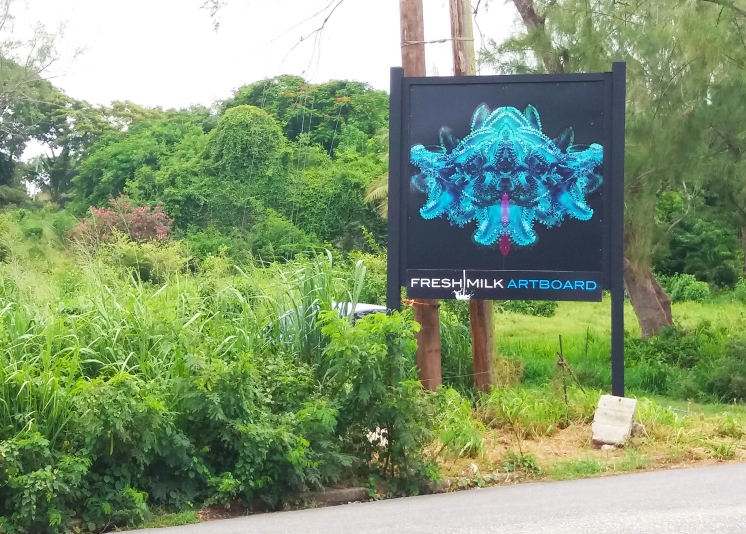 Discovering the Martinican and Cuban flora triggered a vivid passion for mythical forest Gods in island cultures. This was the beginning of an identity quest through the exploration of topics dealing with the offscreen of perception, and rhizome graphical macroscopic universes.

His polymorphic art reveals the interbreeding and hybridization process in the collective and individual unconsciousness in Caribbean imagination.

The presented works are from the Offscreen and the Blossoms realtime interactive and generative video series. These images are created in realtime by using fractal data and user intervention that creates and transforms the patterns on the fly. The Blossoms series was created during David’s Davidoff Art Initiative Beijing residency in 2016, where tropical flora was used as a metaphor of air purification while the random animated patterns were growing and expanding on the city walls.

To take a look at all of the other submissions we received from around the Caribbean, check out our online exhibition of the work, celebrating the positive response we received to this call.

Inspired by the dynamism and power of Shaquille O’Neal’s Dunkman logo; as well as his legacy of being one of the most aggressive, combative and dominant players in the NBA’s history, ‘The Beast’ is my expression of the “black male-brute” stereotype.

Using the original logo as a template, I collaged photographs, various images found in popular media and historical texts via Photoshop to form the final piece. While it was not necessary for the viewer to know which athlete a piece is inspired by, that knowledge of the athlete was critical in my selection of the images to use. For ‘The Beast’, intuitive decisions were made based on my perception of O’Neal and his presence as a cultural icon.

Conceptually, ‘The Beast’, like many other collages, is deliberately self-contradictory. Slave revolt texts and upraised fists are counterbalanced by shackles still intact, while the iconic black power symbol when placed on the shoes becomes an ironic brand worn by the primate character.

Through these symbols I acknowledge the important role basketball, and by extension sports, has played in bridging social and economic gaps while also criticizing how the system is set up. The image of the black male being less than human—a big, powerful animal—is one we have struggled to erase, yet the narrative of the NBA has constantly reaffirmed this. Blacks are generally praised for their athleticism, strength and physical qualities while the most lucrative deals and sponsorships usually go to the black basketballers who best exhibit these traits.

As the character in ‘The Beast’ is shackled to what is effectively his own image, I fear some part of the “black male-brute” stereotype is ingrained in our psyche. Many black basketballers voluntarily embrace being a beast on the court while the sports and media industries eagerly promote these images. It’s a catch-22 situation; as we have bridged many racial gaps, we have also unintentionally reaffirmed misguided stereotypes.

This edition of the ArtBoard was generously sponsored by the David Dale Gallery & Studios, Scotland.

Evan Avery’s work was featured on our inaugural ArtBoard display, launched in October 2013. Additionally, while Evan’s work was exhibited in Barbados, he had also designed a graphic to be installed as an adhesive decal at Casa Tomada, Sao Paulo, in their similar public gallery space ‘A Casa Recebe’ – a street facing window which presents works by visual artists working in Brazil and internationally.