Fresh Milk  is pleased to have partnered with the local initiative Adopt A Stop to bring art into the public space, commissioning six young Barbadian artists for the first edition of FRESH STOPS to produce original artwork on benches which have been popping up around the island from October 2014.

The artists are Evan Avery, Matthew Clarke, Versia Harris, Mark King, Simone Padmore and Ronald Williams. This project is an opportunity to create visibility for the work these emerging creatives are doing, allowing the public to encounter and interact with their pieces in everyday life, generating interest and inviting dialogue about their practices.

Evan Avery – ‘Let’s Go to the Future Together’
Located at the Errol Barrow Centre for Creative Imagination, St. Michael

I’ve used the bench as a way to talk to the public with colour. Art in the public setting provides a way to strengthen communities, and everyone could use some colour in their lives. Straying away from my character and text driven work, I took a minimalist approach and experimented with polygonal shapes and lines to convey a message of connectivity. The straight lines and juxtaposed angles have a haphazard flow to them, creating interesting movements, wrapping the bench with a mesh of colour.

Let’s Go to the Future Together by Evan Avery, located at the EBCCI 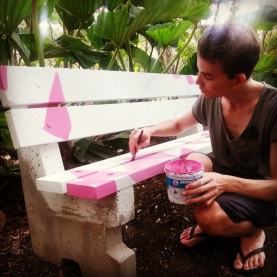 “Victoria” serves as a temporary spatial reference anchor that alters a cherished space. The bench thus acts as a marker that activates the environment lending a different perspective to the passerby and participant.

Versia Harris – ‘At the Side of Something’
Located at River Bay, St. Lucy

‘At the Side of Something’ attempts to embody a moment of solitude; a figure stands alone and somewhat out of place in a large forested area with only his reflection for company. It aims to capture the feeling of being alone while surrounded by so much. 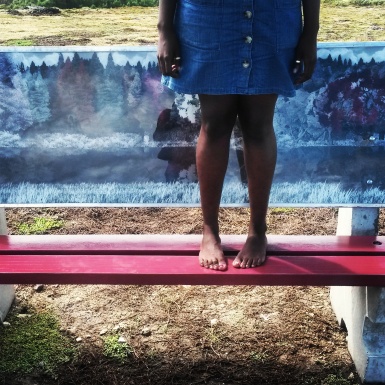 Versia Harris, At the Side of Something

I originally wanted to work along the theme of Organic versus Geometric. During the process I repeatedly listened to a song by the name of ‘Iulius‘ by Justin Nozuka. It inspired me to create a deity or nymph for the bench and its surroundings. The song’s trance caused my work to turn out dominantly organic. 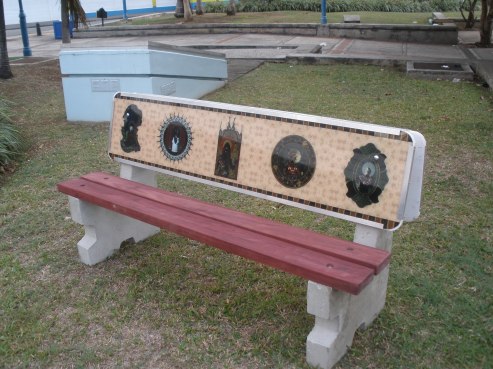 Hardears Universe showcases a collection of characters from the ‘Hardears World’ featured in my graphic novels. It is a place of fantasy populated by characters from Caribbean folklore.

The Adopt A Stop project provides socially beneficial advertising.in the form of bus shelters, benches and outdoor fitness stations at prime sites around Barbados. They embrace solar lighting, local materials and tropical design in keeping with their goal of environmental sustainability.