Fresh Milk and Adopt A Stop continue the Fresh Stops collaborative project, beginning 2015 with a piece by Simone Padmore titled ‘Protector’. In an attempt to bring art into the public space, six artists were commissioned to produce original artwork for benches that will appear at varied locations around the island.

The other participating artists include Evan Avery, Matthew Clarke, Versia Harris, Mark  King and Ronald Williams. This project creates visibility for the work of emerging creatives, allowing the public to encounter and interact with their pieces in everyday life, generating interest and inviting dialogue  about their practices. 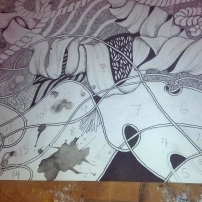 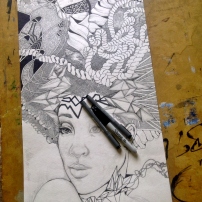 ‘Protector’ by Simone Padmore has now been installed at Hunte’s Gardens, St. Joseph . Thank you to Adopt A Stop for partnering with us to produce this beautiful bench, and to Hunte’s Gardens for agreeing to host it! 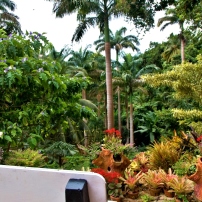 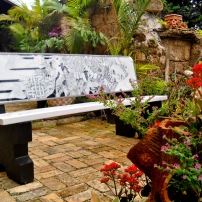 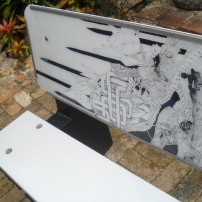 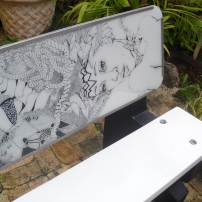 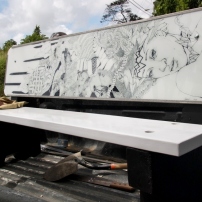 I originally wanted to work along the theme of Organic versus Geometric. During the process I repeatedly listened to a song by the name of ‘Iulius‘ by Justin Nozuka. It inspired me to create a deity or nymph for the bench and its surroundings. The song’s trance caused my work to turn out dominantly organic.

Simone Padmore, also known as Simone Asia, is an illustrator who was born on May 2nd, 1990 in Bridgetown, Barbados. Since the age of four she has been very interested in art, particularly the drawing of human figures. From 2006-2011, Simone attended the Barbados Community College (BCC) where she received her Associate’s Degree in Visual Arts and her Bachelor’s of Fine Art. Attending BCC exposed Simone to many different art forms, techniques and experimentation. As the days went by, she developed a stronger sensibility for drawing and a love for pen and ink, which today is her desired media of choice.

After college, Simone continued her independent practice and has exhibited in art shows and fund-raising events. Simone won an incentive award at NIFCA in 2011. She also was featured in magazines such as ARC Magazine, FuriaMag and Caribbean Beat, along with a few online fanzines.

Simone has done three residencies so far – Fresh Milk (Barbados) in 2012 and Projects & Space (Barbados) and Alice Yard (Trinidad) in 2014, all of which have contributed to the further development of her work.