One of the most incredible aspects of this Fresh Milk residency is the solidarity. This past week not only have  I been able to engage with Annalee Davis, the Director, and Katherine Kennedy, Assistant-extraordiniare but also Holly Byone, Founder and Editor-In-Chief of ARC Magazine, was here collaborating on a grant proposal. The internet offers endless opportunities to build connections but there is something invaluable about sharing physical space with these dynamic women, who are each wells of knowledge and experience. In the midst of all the work that each of us was engaged in, we were able to find moments of pause (and venting and laughter) together. In a world that is focused on productivity, but also requires so much time out of us in order to manifest sustainable change, it can be so easy to downplay the value of taking the time to enjoy the company of the people who help to keep us going.

It has also been a blessing to collaborate with Varia Williams, a brilliant actor and Managing Director of Mustardseed Productions, as the character in the film that I’ve been creating while here in Barbados. I am not sure that I can even begin to articulate what the process of working with Varia has been like. We fell into a really natural rhythm, connecting to the film’s concept in unique ways that often overlapped. I started with an idea and went into a way more experimental direction, which only an actor with her ability to work in a more subtle and bodily way, could have carried. It has truly been a collaboration, her experience as an actor and her vibrant energy brought elements to the process that I couldn’t have conceived.

At some point before arriving here, I was considering what type of project to work on during this residency and set my sights on a narrative short film. As anyone who has ever proposed a project of any kind knows… things rarely go as planned. The more people responded to my initial concept the more I wanted to create a piece that was open and allowed people to interpret it in a way that spoke directly to their experience and so, started to feel myself drawn away from the narrative I had begun to create. Of course, openness is possible within the plot of a narrative. In fact this was recently demonstrated in the Fresh Milk space at Saturday night’s screening of A Hand Full of Dirt. Director, Russell Watson, and Producer, Lisa Harewood, engaged questions after the film and spoke about the ways that plot has connected with people across the globe in diverse audiences. As I watched the film for the first time that evening, I was struck by the nuanced way that they were able to weave together an engaging story that touched on so many things that were both unique to a Caribbean experience but also experienced in similar ways by other people as well: migration, corruption, tourism, masculinity, property ownership and cycles of violence, just to name a few. It was wonderful that an audience of people, who were mostly at Fresh Milk for the first time, were able to talk with the filmmakers afterwards about their own experiences of the film.

As for my piece, I’ve jumped head first into the pool of the experimental. Shooting is complete and the quality is incredible thanks to the equipment I rented through Andrew Jemmott at Caribbean Webcast. Now it is all about editing. 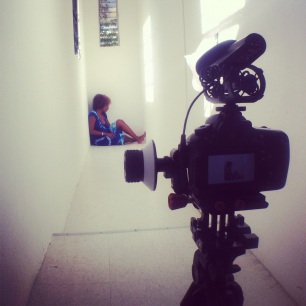 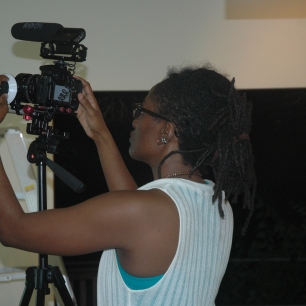 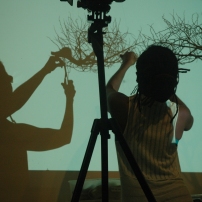