Fresh Milk is very pleased to announce Barbadian artist Simone Asia as the winner of the Fresh Milk ‘My Time’ Local Residency prize for 2015. Congratulations Simone!

Simone’s one-month residency runs from Monday April 13 – Friday May 8, 2015. She sees this period as a “playground for opportunities,” a chance to experiment with surface, scale and technique. She will explore and respond organically to the environment at Fresh Milk to feed the current series of work she has been producing, which is inspired by dreams and reinterpretations of personal experiences.

Simone Padmore, also known as Simone Asia, is an illustrator who was born on May 2nd, 1990 in Bridgetown, Barbados. From 2006-2011, Simone attended the Barbados Community College (BCC) where she received her Associate’s Degree in Visual Arts and her Bachelor’s of Fine Art. Attending BCC exposed Simone to many different art forms, techniques and experimentation where she developed a stronger sensibility for drawing and a love for pen and ink.

After college, Simone continued her independent practice and has exhibited in art shows, including The Place Between Here and There, an exhibition of contemporary Barbadian art taking place at The Frame & Art Co. between April 17 – May 16, 2015. She won an incentive award at NIFCA in 2011 and was featured in ARC Magazine, FuriaMag and Caribbean Beat, along with a few online fanzines.

Simone has participated in three residencies to date: a one week residency at Fresh Milk (Barbados) in 2012, one with Projects & Space (Barbados) and one with Alice Yard (Trinidad) in 2014. 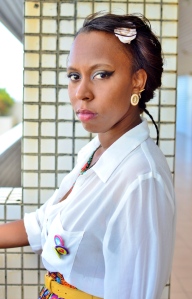 As an artist, I want to have an honest connection with my work. I gravitate towards ideas about science, the universe, dreams, the mind and experiences. I seek to explore these ideas from a personal perspective, expressing them through very detailed, abstract drawings rendered by pen and ink. With these, I create an alternate reality; my hybrids within my own universe.

My use of detail is based on my belief that I have some type of Obsessive Compulsive Disorder (OCD). My thoughts consume me and I also write a lot, often repetitively. I am very particular in my ways and at times I can be a bit of a perfectionist. The use of detail, however, is not specifically linked to any one series, but to the notion of being disciplined.

I illustrate this way because, even though it can be time consuming, it is a stress reliever. It puts me in a trance-like state where it eludes the concept of time. It also distracts me from my racing thoughts; it is my therapy.