Ark Ramsay shares a blog post about their fourth and final week as writer-in-residence at Fresh Milk.  With the official residency coming to an end, the question that is asked both internally and externally looms: what is the value of this experience? Ark thinks about the tangible and intangible responses to this question, recognising that residencies are in many ways immeasurable. They allow for the sowing of seeds that bear fruit in multiple, sometimes unforseeable ways over prolonged periods of time, and give creators the too-often denied permission to deeply and unapologetically invest in their practice. Read more below: 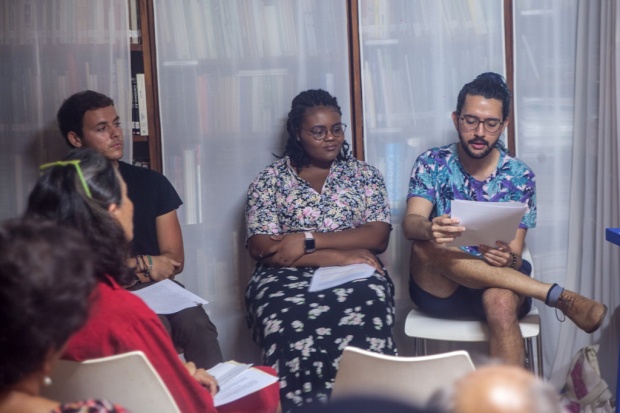 I am terrible at goodbyes.

I preempt the pain of separation by inducing small shocks–inoculating myself against the final disruption–so that what arrives is already marrow-sucked.

I grow nostalgic for things that have not yet ended. It’s a feeling similar to déjà vu, in that I become a passenger in my body–aware of the artifice–trying to hold onto things–knowing them to be transient. I think, I will miss this; outcome being, I do miss this.

I have never walked on stilts, but my mind is well-trained at balancing conflicting mechanisms. It tight-ropes between trying to soften the now, and trying to seal it off in amber.

This was my last week here at Fresh Milk. I did not want it to be subsumed by my familiar patterns.

I slowed down at this farm.

I spent hours sitting amongst the quiet caucus of trees that I had no formal names for.

I contemplated, watched myself in my contemplation, and eventually (growing tired of the intruding me) learned to trust in silence again. There is a deep and penetrating silence (even with the lowing of cows, and the sometimes-intrusion of mahogany pods on a corrugated iron roof) which I had missed entirely while living in Shanghai. It is the kind of silence that May Sarton claims (writing in “Journal of a Solitude”), will force one to confront the starved face at the window–starved cat, starved person–simply put: in the silence are the questions you are running from.

I wanted so badly to push forward this week. To write ceaselessly. To unearth new. To shore up old. But there was a raggedness–the bucket of myself was overflowing with Bathsheba swampies–toppling each other in their quest to be rid of me. Uninspired, tired, I wrote. I wrote what was functional and necessary. I wrote because the ‘job’ of writing must persist even if the muses are late–or never arrive at all. Because you have to go through many roughnesses to reach the roughness that matters–the thousand words that delivers up one usable paragraph. Writing too carefully, I have learnt (am learning), feeds only the overbearing perfectionist–not the nascent manuscript.

And when that was done I retreated fully to silence. I stayed at the farm until the sun set, and the unresolved work of cows was put to bed. I stayed until the St. George noise had backgrounded to a hum, and even the mahogany pods were reticent to fall. I stayed until I could not even remember what it was like to sit in my apartment in Shanghai and hear the forever-din of city life. This resolved the raggedness.

Another form of quiet came to us this week in little Roo. A three-legged rescue puppy with a penchant for nuzzling into the softest parts of someone, and sleeping.

He took up the entire day–not in his need for me–but in my curative need for him. I was reminded of a Joy Williams quote, from one of her strange short stories, “Shepherd”: many things that human words have harmed are restored again by the silence of animals.

That ‘harm’ is always soiled up in our attempts to collate worth, value, the immediate return on investment of all things. For a writer this equates to: page count, characters built, scenarios polished, contacts made, submissions finalized.

What is the payout on a month in the bush?

Why should an organization be structured to support (what sometimes looks), like an artist’s retreat (read: vacation)?

I can only recount my own process. What I, in my ruminations, consider to be returns.

What a residency does (I have found out), is provide this buffer against the anxiety of production. It cuts into the noise of ‘value’, and demands that one return to the font of all things–tend the garden–not force (an unforcible) germination process. I have a friend who talks about her work by saying: it’s still cooking. And I imagine a fragrant Caribbean one-pot, full of plantains, beans and everything else in the fridge–but it’s not ready. It needs time. The insights into my work, discovered here, may take two years to prove themselves useful. A story I began writing when I was nineteen needed the addition of the Bardo Thodol (Tibetan Book of the Dead) to reach full coherency–something I only came to see when I was listening to an audio version of that text at four a.m. in Shanghai. What is given now cannot always be used now. But all things are banked, and returned to.

Without time, nothing is given.

Without a buffer against the anxiety of production. The treadmill of value. Nothing valuable is made.

At the risk of overpowering this blog post with quotations, indulge me one last time:

Yet, how do you relax without the safety net of organizations and people who understand that the process of art runs contra to the process of production (as in product; as in consumer)?

What I want to do in these final days is be an active participant in the unfolding. I do not want to sorrow an ending that has not yet ended (though this is inevitable for me). I do not want to contest the value of a thing that I know to have imbued my work with indelible value. I want simply to be here. In the silence. In the nurturing.

The thing about this writing life that I am coming to understand, is that what it takes from you–it also rewards you with.

Thank you, and goodnight