A visit to Workman’s Primary School as a part of my Community Outreach, kick started week three of my residency. I formulated a few questions and went with the intention of having a conversation with the students of class 4 about their thoughts and feelings on Disney films and characters, and also about the prominence of television in their daily lives. It was a first for me, interacting with that number of kids in that setting; I’m not very up to date on what the kids of today are like. However, they were surprisingly pleasant and very cooperative. In between the humor and fun that I had talking to these children, the answers to my questions were a mixture of the expected and unexpected. They gave me some insight into how they saw these films and how much they actually watched TV. Granted, this was only a class of about fifteen students, a number too small to be projected across the generation but they do watch a lot more TV than I did at that age. To them, watching TV was on par, if not more desired, with going outside to play. This relates to the concept of my animation about the push and pull between the physical world and the virtual one.

Later in the week Alicia Alleyne and Shanika Grimes came to the studio, along with my usual company of Katherine Kennedy. Even though each of us was set to our individual tasks and projects, I was glad for the company and the conversations. Sheena Rose and Mark King also came out to see my progress and to give feedback.

Through the laughter, the heated discussions and the dismantling of Annalee Davis’ work – which by the way took four people, two days and a lot of effort – this week also brought me some challenges with my work. Technological malfunctions are inevitable. But the despair of a program breakdown is magnified when it is your primary source of work. Obviously, working with technology for at least a year and half now, I expect it to malfunction or an important program to suddenly stop working, and yet after all this time it doesn’t get any less frustrating, especially when it hinders progress within the short period of time that I have. In any case all is restored and the animation continues. 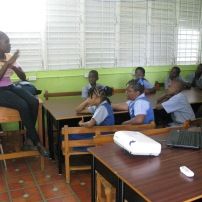 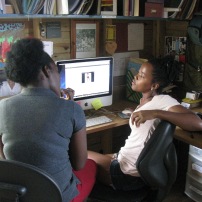 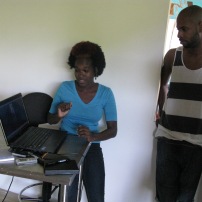