One week into our residency at Fresh Milk, and I’m already longing for more time here.  It’s such a gift to have access to the beautiful Fresh Milk studio and library.  Christian and I are exploring the island in my uncle’s car, scouting locations for my installation series, tentatively titled Repositioned Objects.  Lately I’ve been thinking about my preoccupation with decay and erosion, which is in some way or another present in all of my work.  It’s this very particular thing in the Caribbean – the way that structures can come apart, and literally crumble; the elements are always intimately and intensely present. I built the 6’x6′ cube below in a burned-out shop in Bridgetown this week.  The shop is in the midst of being rebuilt so I had this brief window of time (24 hours) to build, photograph, and ultimately disassemble the piece.  I was immediately drawn to the industrial quality of the space – carrying the traces of what it used to be and the questions of how it fell into disrepair, even in its current state of being prepped for re-construction. 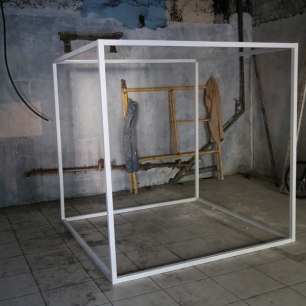 In contrast, two weeks ago, just as the temperature dropped below freezing in Toronto, I installed the form below, which was originally inspired by a roti hut, in an industrial parking lot at Keele & St Clair.  I had to trek into the store nearby every 10 minutes or so to thaw my hands as I put it together.  This residency is affording me a really valuable space to think through what it means to be of and from many different places, and the translations that are negotiated in the in-between. 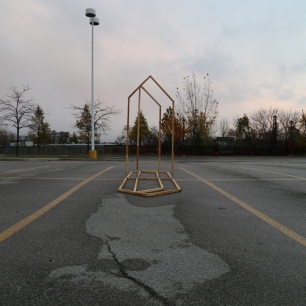