US-based interdisciplinary artist Nyugen Smith shares his first blog post about his Fresh Milk residency. Nyugen has begun his experience by actively engaging with the site of Fresh Milk, which is located on a former plantation – now a working dairy farm –  and learning the history of this space and Barbados on the whole through conversations with Annalee Davis, exploring the grounds and conducting research in the Colleen Lewis Reading Room. Read more below: 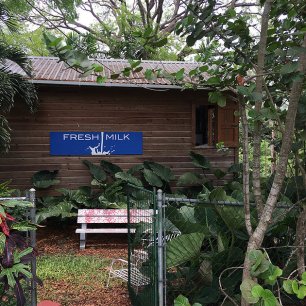 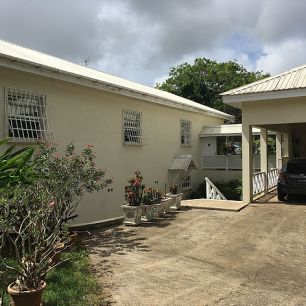 *This blog post may contain language and content that may be unsuitable for children and the prudish. Discretion is advised.

Just prior to leaving home in the USA for this, my third Caribbean island as part of my Leonore Annenberg Arts fellowship, I was struck by the words, actions and accomplishments of peers/contemporaries/family.

It is because of them, I am inspired to approach this month-long residency with a deeper level of introspection, transparency, courage and audacity as it relates to process and reflection on time and work. Thank you.

I don’t know much about Barbados. I spoke with confidence correcting someone back home that Barbados was a larger island than Martinique. I was wrong. The former is 166.4 miles squared, while the latter is 436 miles squared. I was laughed at by a Bajan woman next to me on the plane on the way here when I asked her about the mountains on the island. “Barbados flat!” she said. Prior to coming, I wanted to know a more about the site where the Fresh Milk residency exists and about its founder, Annalee Davis.  Annalee (Fresh Milk) is also a co-creator (together with ARC Magazine) of Tilting Axis, a roving project with a goal of negotiating strategic regional and international alliances for the further development of infrastructure, production and markets for the Caribbean’s visual arts sector. I had followed her 2016 social media posts of her (bush) Tea Services project at the Empire Remains Shop in London, England where she offered to visitors, daily servings of varieties of bush tea collected from the fields of the former sugarcane plantation and adjoining rab lands out of tea-sets containing shards of crockery mined from the ground of her family property in Barbados. I know bush tea. I grew up on it. I picked bush for tea. The history and legacy of empire is of interest to me and this interest informs my work…so I wanted to know more…

Tilting Axis 3: Curating the Caribbean (May 18 -20, 2017) was hosted by the National Gallery of the Cayman Islands and the presentations by arts professionals was live streamed on Facebook and archived for later viewing. I watched three of the presentations so far (including Annalee’s opening address) and they were incredibly engaging. I said to myself, “..this Tilting Axis project is important, necessary and exciting.” So I looked to see what else I could find about Ms. Davis’ work and came across her 2014 essay on ARC magazine’s website titled: Drawing Lines – Counterpoints from inside the plantation, State(s) of Emergence(y) and crises of belonging at home. Here I learned a little about the history of the site of Fresh Milk.

I could continue by providing references to my work that are related to what Annalee refers to in this essay as the “plantation complex,” however, one can look at my website and or google to see the connections.  So to be here, on a location that is charged with all of this present and living history, is an opportunity that I am blessed to have and grateful to have been accepted to continue in my exploration and make the work that I am called to do.

noun
1.
an opaque white fluid rich in fat and protein, secreted by female mammals for the nourishment of their young.

verb
1.
draw milk from (a cow or other animal), either by hand or mechanically.
synonyms:draw milk from, express milk from

2.
to exploit something to the utmost

Today I watched the milking of over 24 cows. The process was systematic and efficient. I watched the area where they stand and feed everyday, be cleaned by what I would call a giant metal squeegee on the back of a tractor. Keshan reversed over and over, pushing all the waste to the end of both aisles, piling it up. I watched the calves in their pens, ears tagged with numbers to identify each, just as the adults were. They produced. They are of value. They are currency.

Not far from where they spend much of their days, stands what Annalee referred to in the aforementioned essay as vestiges of an insidious complex. The remains of a sugar mill and its outposts. Though missing its top and outstretching windmill, it still stands its ground, with baritone breath, holding secrets and long memory. The former mill and nearby trees whisper tales longer than the young vines that hang from their tops, down to hallowed ground, but yet to dig for bones, tobacco pipes and fragmented wares. Evidence of the hand is all over the limestone, wood and metal structure that was the mill. New life springs from the death of her. I touched and listened. The arched orifices are like deep gasps as if to revive. Parts and pieces of her lay strewn about and kept alive still, by the same air that filled lungs there centuries ago. 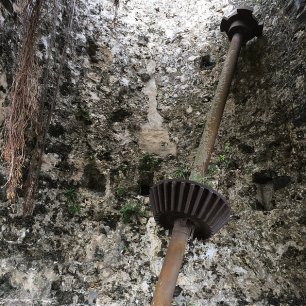 I thought about the bodies that laboured here, on this site, and how they might have moved, how many were they over time – like if all of their souls were present at once – just standing there to be counted, to be called by name. They produced. They were of value. They were currency.

This was not a moment of gloom for me, but a joyous one – like, YES! You are here, Nyugen. In the mix with all of this history. To make full use of this time and opportunity to engage, share, learn and build. As I walked the grounds in reflection, I began to recall the email introductions made by the FM staff, connecting me with historians, scholars, artists and writers here in Barbados. There was an anxiousness, a ready to burst feeling that ran through me from crown to sole. I then went to the Colleen Lewis Reading Room adjacent to the studio and browsed a portion of the over 3468 items in the collection and pulled a few titles to sit with for a while.

In the preface to The Artist’s Body, edited by Tracy Warr, Warr writes, “Artists have investigated the temporality, contingency and instability of the body, and have explored the notion that identity is ‘acted out’ within and beyond cultural boundaries, rather than being an inherent quality. They have explored the notion of risk, fear, death, danger and sexuality, at times when the body has been most threatened by these things.” This caused me to reflect on notes I took during my walk around the acres. I thought about the complex notion of identity in the Caribbean and how one’s role or position within the social structure is inextricably linked to the body that ‘act(s) out’ the role(s). Then the questions arise: does the ability to effectively execute a role depend on one inherently possessing the qualities of said role? and if so, how does the threat of fear, death, risk, and sexual violence deepen the commitment to the role. Then one can ask further questions applicable to the plantation model about inherent qualities formed by what Carl Jung referred to as collective unconsciousness.

Warr goes on to write about Dadaist of the 1910s and 1920s making “art in places more real and relevant.” This site, is perhaps more “real and relevant” to my work than any gallery or institution in which I have exhibited or made performances. It is my hope that the work that happens here continues in the trajectory of my time spent in Martinique – (Working form a non-Western cultural perspective), not (so) focus(ing) on a notion of the individual as a central, cumulative point, but rather on an understanding of self as part of a continuum in time, a community, an environment, a cosmos. – Warr