Sonia will be in conversation about her work with Ayesha Gibson-Gill, Cultural Officer for Literary Arts at the National Cultural Foundation, and Tara Inniss, Lecturer in the Department of History and Philosophy at The University of the West Indies, Cave Hill Campus.

This event is free and open to the public. Directions to Fresh Milk can be found on the ‘About Page’ of our website here. 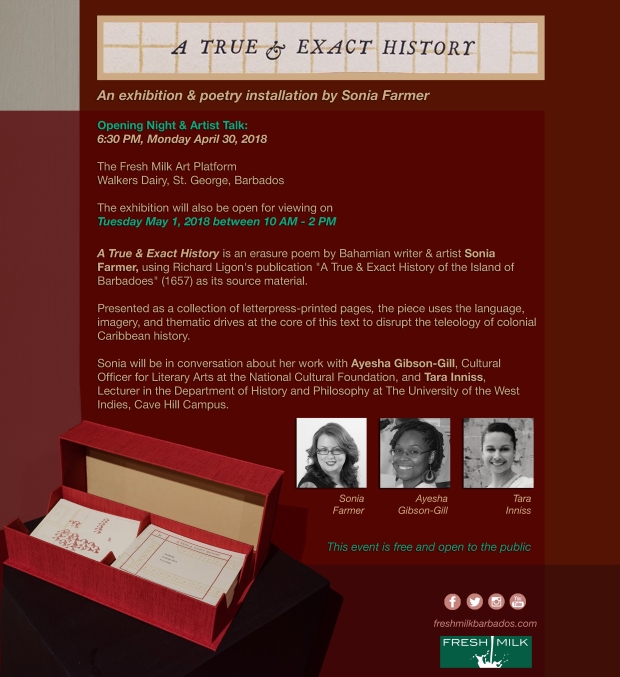 I consider my writing practice a tool for disrupting and investigating existing narratives, forming a response that is not necessarily preoccupied with making new narratives to replace them, but rather exposing different narratives as a parallel, ultimately calling into question the inherent power structure in the existing narrative (such as historical accounts, folktales, mythologies, canonical books, etc). Experimental process of generation, such as erasure, found text, mistranslation, technological intervention, or other restrictive methods, are especially exciting opportunities to create direct responses to existing narratives by using its own language against itself. The resulting text then becomes the content for my final projects.

The core of my artist book A True & Exact History is an erasure of one of the most formative descriptions of the English Caribbean in the seventeenth Century, Richard Ligon’s 1657 guidebook, “A True and Exact History of Barbadoes.” This project began during March 2016 at a writing residency at Fresh Milk, an art platform in St. George, Barbados, where I encountered Ligon’s book through their Colleen Lewis Reading Room. Using the language, imagery, and thematic drives at the core of this text to disrupt the teleology of colonial Caribbean history, these unbound poetic fragments scattered among a shifting landscape simultaneously re-create and resist narrative as a device of cohesive history, ultimately calling into question what it means to write “a true and exact history” of anything.

Sonia Farmer is a writer, visual artist, and small press publisher who uses letterpress printing, bookbinding, hand-papermaking, and digital projects to build narratives about the Caribbean space. She is the founder of Poinciana Paper Press, a small and independent press located in Nassau, The Bahamas, which produces handmade and limited edition chapbooks of Caribbean literature and promotes the crafts of book arts through workshops and creative collaborations. Her artwork has been exhibited throughout Nassau including at the National Art Gallery of The Bahamas. She is the author of “Infidelities” (Poinciana Paper Press, 2017) which was longlisted for the 2018 OCM Bocas Prize for Caribbean Literature. She has also self-published several chapbooks. Her poetry has won the 2011 Prize in the Small Axe Literary Competition and has appeared in various journals. She holds a BFA in Writing from Pratt Institute and is currently pursuing her MFA studies in Book Arts at the University of Iowa. 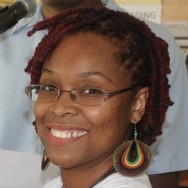 Ayesha Gibson-Gill M.A Arts Management (Greenwich), B.A Theatre Studies (Acadia) is a writer, director, actor, drama tutor, arts administrator, producer, former radio announcer, sometime vocalist and always mother.   In 2017 she conceptualized and artistically produced a signal CARIFESTA XIII event, Word for Word- Night of the Literary Masters, along with other literary engagements. She has been the Cultural Officer for Literary Arts at the National Cultural Foundation Barbados since 2012. 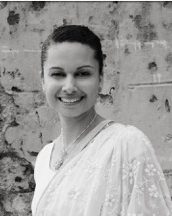 Tara Inniss is a Lecturer in the Department of History and Philosophy at Cave Hill Campus, The University of the West Indies (UWI). Her focus areas include: history of medicine; history of social policy; and heritage and social development. In 2002-03, she received a Split-Site Commonwealth PhD Scholarship to study at the UWI/University of Manchester. In 2007, she completed a Masters in International Social Development at the University of New South Wales in Sydney. Dr. Inniss has served as a delegate for the Government of Barbados on the World Heritage Committee, and was a member of the Research Team which assembled the Nomination Dossier for UNESCO World Heritage Property Historic Bridgetown and its Garrison. She currently sits on several committees for the Barbados World Heritage Committee, Barbados Museum and Historical Society and is Secretary-Treasurer of the Association of Caribbean Historians (ACH).