Performance art seems to be taking root in Barbados, and this can not the least be ascribed to the possibilities opened up by a private, non-commercial space like Fresh Milk. In late November, the platform thus hosted ‘Hustle de Money’ by Alberta Whittle (‘aka Big Red aka General outta Glitter Zone’).

The performance ostensibly responded to a familiar dilemma, not just of the socially engaged artist, but of every conscientious contemporary citizen: how do we negotiate the daily challenges to our personal sensibilities and residual morality? How do we, as women, respond to stereotyping, objectification, predatory behavior and what might be perceived as other women’s self-degradation? Are chauvinistic dancehall lyrics and lewd comments from the rude boy on the street inexcusable, ignorant or the self-defense of a wounded masculinity? And if it is – do we denounce it, patronizingly describe the ‘perpetrators’ as victims or withdraw from commenting on what we do not understand? In ‘Hustle de Money’ Alberta Whittle instead set out to ‘try it on’!

The event was preceded by the circulation of a number of witty ‘mock-posters’ in which the artist appeared as both male and female icons of popular culture. In sexually suggestive outfits and postures, Whittle thus advertised the event, but also exposed the fixation on sexuality, which infuses a range of contemporary industries, from music to tourism.

The performance itself, however, changed the tenor from that of benign satire to that of a deliberately contrived ritual. Whittle’s open-air stage was the front yard of the Fresh Milk main house and the audience was standing in a semicircle across from the front-patio, leaving enough space for the performance to unfold around a door-sized screen. In the background, presumably to set the scene, two small tv-screens ran looped video-sequences of male dancers.

For the 10-minute duration of ‘Hustle de Money’, the artist enacted movements and recited phrases suggestive of the over-wrought and fetishistic machismo of Caribbean ‘fete-’ and street-culture. Each sequence started and ended with the artist emerging from or returning to the cover of the screen, where she would adjust her costume (alternating between male and female identities: torn up black tights for the female, simple track-pants for the male).

The moves were caricatured – Whittle edged, inched, wriggled, wined and crept across the ‘floor’, but the incantatory enunciation of insistently cocky and provocative rude-boy (or -girl) phrases (‘Get gal easy ’, ‘I beat me chest, ‘cus I know I is the best’ or ‘Bad boy no good. Good boy no fun. I love my Mr. Wrong’) was without theatrical effort as if she was merely tasting the words or trying to appropriate another person’s mantra: the voice laid distance to (or vainly tried to evoke) the meaning of the words, but also put forward the possibility – and this was to my mind the biggest scoop of the performance – that such phrases, also in their regular usage, may serve the purpose of deflective self-distancing.

The morally neutral inflection of the verbal mimicry thus alternated with a less detached irony, which not only came across in the caricatured movements, but especially in the sequences involving an exchange of bananas between the artist and members of the audience. As a phallic symbol, the banana was an obvious reference to the cultivation and insecurities of extreme masculinity, but it also put the more scathing ‘monkey-metaphor’ on the table and thereby lost mimicry’s strategic advantage of ambiguity.

This apparent ambivalence induces the question of objectives: did the artist invite the audience along in an attempt at coming to terms with popular culture, or did she seek to ‘talk back’ and show chauvinism up to itself? And this is where certain problems arise, for in the latter case, the location of the performance is clearly mistaken, and, in the former, the message and its reception becomes circular – Whittle and her audience will be unified in their common uncertainties and redouble the distance to the ‘other’. Moreover, in the cerebral environment of a venue like Fresh Milk, an event of this nature always, in the final analysis, becomes its own subject-matter – and the danger is for the aesthetic to make a mere pretext of the message.

Whittle’s ‘Hustle de Money’ thus exposed the tragic predicament of artists, who – fervently and nobly – seek to reach beyond the confinement of their discipline, but invariably are returned to it. The critical subtext of this event was therefore not, after all, how we should understand or respond to rude-boy calls and hisses, but whether art, if it can only ever gesture towards problems it cannot transcend, must keep trying all the same? 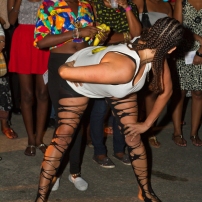 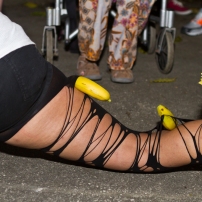 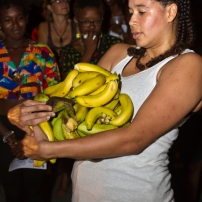