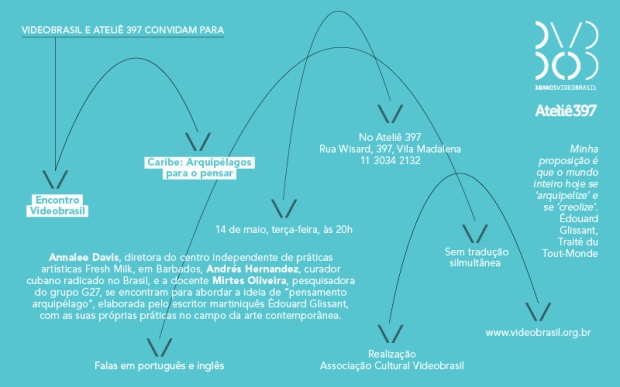 To the Martiniquais writer Édouard Glissant, the geography of Antillean archipelagos represents a template for thinking a “creole world” whose dealings with the others are no longer outlined by instances of multiculturalism and compartmentalized identities, but rather by coexistence and dissolution processes. Glissant builds on the Antilles’ insular multitude to propose a model of “archipelago-thinking” as opposed to “continental thinking,” whose nature is hegemonic or homogeneity-inducing.

Annalee Davis, director of Barbados’ Fresh Milk independent center for art practices; Andrés Hernandez, a Cuban-born, Brazilian-based curator; and Mirtes Oliveira, a member of the G27 study group will convene at São Paulo’s Ateliê 397 to relate the notion of “archipelago thinking,” coined by Glissant, with their own contemporary art practices.

This initiative will usher in a new phase in Videobrasil’s audience interface, featuring horizontal, collaborative, investigative, and debate-oriented platforms.

Featuring: Andrés Hernandez, Mirtes Oliveira, Annalee Davis. Mediated by Sabrina Moura. English and Portuguese will be spoken. No simultaneous translation available. On the occasion, issues of ARC Magazine dedicated to Caribbean art, will be available to public consulting.

Annalee Davis is a Barbadian visual artist whose work addresses the Caribbean’s postcolonial heritage. She was the founder of Fresh Milk, an independent Barbados-based association that supports research exchange initiatives and fosters productions by contemporary creators. She is a part-time professor at the Barbados Community College’s baccalaureate program. As an artist, she has featured in the São Paulo and Havana biennials (both in 1994), among other shows.

Mirtes Marins de Oliveira was the coordinator of the Baccalaureate in Fine Arts (1997-2006) at Faculdade Santa Marcelina (Fasm), and the implementer and coordinator, from 2003 to 2013, of the master’s program in visual arts at the same institution. Presently, she is a professor at the masters and doctoral courses in Design at Universidade Anhembi-Morumbi. The G27 group, of which she is a member alongside Ana Maria Maia (Tomie Ohtake Institute), Regina Parra (FAAP) and Tainá Azeredo (Casa Tomada), studies the manifold aspects of curating processes and practices, by means of historical research on art and design shows held since the emergence of 20th century vanguards.

Founded in 2003 by a group of visual artists (Bruna Costa, Rafael Campos Rocha and Sílvia Jábali), Ateliê 397 promotes the diffusion, production and exhibition of contemporary art. It holds art shows and interdisciplinary events involving video art sessions, performances, happenings, music concerts, publication of artist books, and other forms of contemporary art experimentation. Currently coordinated by Marcelo Amorim and Thais Rivitti, the facility plays the role of spreading debate, creating opportunities for artwork to be shown, and presenting productions by young artists from across Brazil.

Associação Cultural Videobrasil is an international reference center on art from the Southern hemisphere. Created by curator Solange Oliveira Farkas, the former director of the Museum of Modern Art of Bahia, Associação maintains a partnership with SESC. The two institutions have jointly promoted a biennial International Contemporary Art Festival, focused on the geopolitical South circuit, and exhibitions such as Isaac Julien: Geopoetics (São Paulo, 2012), Joseph Beuys – We are the revolution (São Paulo and Salvador, 2010/2011), and Sophie Calle – Take care of yourself (São Paulo and Salvador, 2009). Other ongoing productions of the partnership include the Videobrasil Residency Program; Videobrasil Authors Collection, a series of documentaries; and Caderno SESC_Videobrasil, an annual contemporary art publication. Devised as a platform for production, dissemination and discussion of contemporary art from the Southern hemisphere, by means of partnerships and dialogue with curators, artists and other institutions, Associação also maintains a network of residency partners and educational actions aligned with the Festivals and exhibitions it conceives.

This meeting is an opening activity of a series from the Public Programming segment, a new Videobrasil’s front, dedicated to foster platforms for widening of access and research on contemporary arts and culture.

One thought on “Videobrasil Meeting | Caribbean: Archipelagos for Thought”

Reposted from @lecentredart:
#freshmilkbarbados, @futurecentretrust, @adoptastop and The #healingartsinitiative in partnership with @culturunners as part of the World Health Organization (@who) are pleased to announce the Barbadian artists, selected by jury members across each participating entity, who will design new works to be incorporated into one rain shelter and two benches for installation on the Barbados Trailway Project.