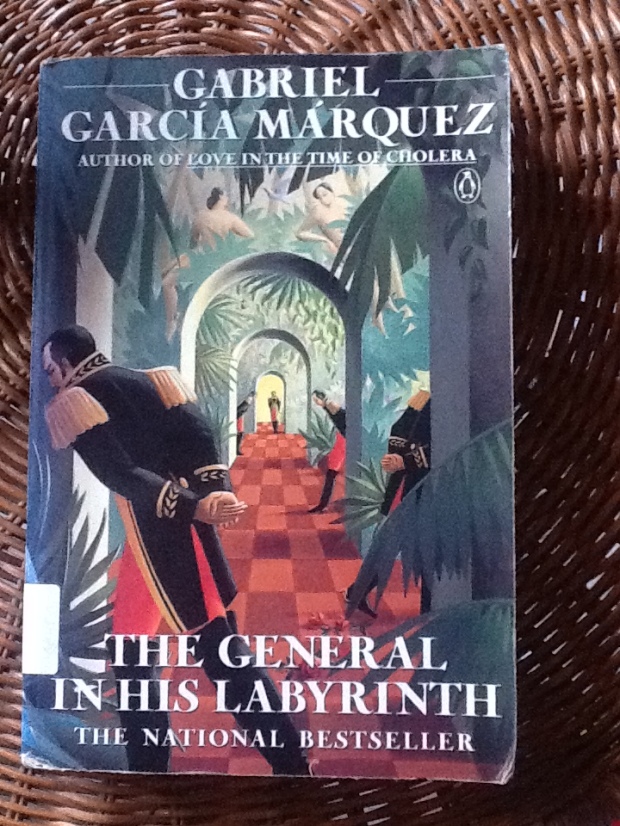 The front cover of The General in His Labyrinth is a blueprint. Its red tiled corridor could be a path in the labyrinthine mental and physical journey of the novel’s main character—the 19th century figure who is known as ‘The Liberator’ of Latin America from Spanish colonialism—General Simon Bolivar.

This path runs through a series of arches that are decorated with tropical trees; two naked women sit in the curves of each arch. Multiple Bolivars in full military regalia can be seen pacing with their hands clasped behind their backs from one side of an arch to another, probably reflecting on his past accomplishments and failures. The Bolivar at the farthest end—at the vanishing point—seems to be attempting to walk backwards, towards the reader/viewer, as if considering a return to his former glory. I say ‘attempting’, because the shrinking of the protagonist seems to reflect Bolivar’s inevitable death. His return happens only through  his labyrinthine recollections of past victories and failures, of great friendships and betrayals, and his thirty-five passionate love affairs.

The above excerpt is from newest member of the FMB Team Kwame Slusher’s review of Gabriel García Márquez’s The General in His Labyrinth, this week’s addition to the Fresh Milk Books Tumblr – the online space inviting interaction with our collection in the Colleen Lewis Reading Room.

For new Critical. Creative. Fresh reviews every week, look out for our #CCF Weekly posts and see the good reads we have available at Fresh Milk!