Fresh Milk is happy to announce that between March 30 – April 10, 2015, we will host Cooking Sections, the London-based duo of Daniel Fernández Pascual and Alon Schwabe. Read more about their research-based practice that explores the overlapping boundaries between visual arts, architecture, geopolitics and food:

Cooking Sections is a London based duo of spatial practitioners with a research based practice that is focused on the organisations of the world through food. For the past two years our work has been mainly devoted to the Empire Remains. The project explores the infrastructure and cultural imaginaries that were set up by the British Empire to promote the food and agricultural industry between home and overseas territories at the beginning of the 20th century. The Empire Remains attests the ways global food networks have evolved until today. The work traces the contemporary history of imperial bananas, sugar, tobacco, cacao, fruits, spices, condiments as well as the new economies and visions that emerged out of them. During the course of the project they are developing a series of objects and products reflecting on the legacy of such trade networks and how they affect the world we live in. The project will culminate in 2016 with The Empire Remains Shop in London, a project space exhibiting the process and research. 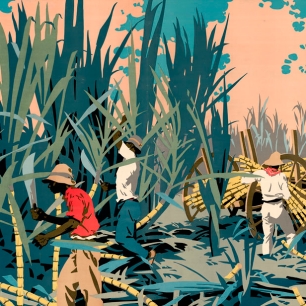 “Our Colonies, Protectorates and Mandated Territories bought from the united Kingdom in 1931 Goods to the value of £36,000,000”_ Horace Taylor, 1932, Empire Marketing Board.

The Empire Remains project is developed through various research trips and residencies around the world in collaboration with a number of cultural institutions. Thanks to the support of Fundación Jumex Arte Contemporáneo, Cooking Sections will spend the month of April in the Caribbean, taking on the Fresh Milk Residency. This trip will investigate the sharp decline in the Caribbean food crops and the critical reinvention of the landscape through agricultural innovation, tourism and offshore activities. In June, Cooking Sections will participate in a residency at Artport, Jaffa-Tel Aviv, dedicated to researching the Jaffa brand in oranges since its establishment during the British Mandate until its current state, when it has been mostly outsourced to groves in Spain and Morocco. Currently several more research trips are being developed towards fieldwork in New Zealand, Hong Kong, Montreal, Mumbai and South Africa.

Cooking Sections is Daniel Fernández Pascual & Alon Schwabe. They are a duo of spatial practitioners based out of London that emerged out of Goldsmiths University. Using installation, performance, mapping and video, their research-based practice explores the overlapping boundaries between visual arts, architecture, geopolitics and food. Cooking Sections was selected for OFFICEUS, the exhibition at the U.S. Pavilion, 2014 Venice Architecture Biennale commissioned by Storefront for Art and Architecture, New York. Their work has also been exhibited at the Festival of Future Nows, Institut Für Raumexperimente, Neue Nationalgalerie Berlin; dOCUMENTA(13); Peggy Guggenheim Collection, Venice; CA2M, Madrid; TEDxTalks, Madrid; Fiorucci Art Trust, London; xACC Weimar; SOS 4.8, Murcia; Haus der Kulturen der Welt, Berlin; Storefront for Art & Architecture New York; 2014 Biennale INTERIEUR, Kortrijk; and have been 2014 residents in The Politics of Food at Delfina Foundation, London. They have recently been recipients of the 2015 Jumex Fundación de Arte Contemporáneo research grants. Their work has been published by Sternberg Press, Lars Müller, Punctum Books, and several international magazines and journals, like Volume, Domus, 2G, The State, Zawia and Utopia amongst others.

The development of The Empire Remains project in The Caribbean was made possible with the supported of the 2015 research travel grant from Fundación Jumex Arte Contemporáneo, Mexico.