In the last blog post about their time in Barbados, Fresh Milk‘s international writer-in-residence Saada Branker fretted about missing out on the beauty of the country. Given all that she and filmmaker Powys Dewhurst encountered in the first few weeks on the island as they diligently collected information and footage for their documentary memory project commemorating Hurricane Janet’s 60th anniversary, the obvious had escaped her. Read more about her final revelations below:

Standing on serene farmland with no beaches in sight

“You cannot leave Barbados without eating your mango in the sea.” I was told.

Experiencing such a rite of passage in my parents’ birthplace had me giddy. Before arriving in Barbados, I was all about the beach. I practically bragged to my Toronto girlfriends that I would interview and research everything I could find on the 1955 hurricane, but I also intended to make it out to sunbathe a couple times a week. “I’ll write daily, read, and relax on the beach,” I explained. “And I’m going to sketch—my feet in the sand and the waves rolling in.” Clearly, I was cocky in my delusion; as if there was only one place I could ground myself.

By our fourth week in the Fresh Milk residency, my ashy foot was still dry.

The rain fell heavy, but sporadically during our last week.

Truth told, on this residency, I was immersed in something deeper and more compelling than the thrill of only sun and sand. Being in landlocked St. George, I was walking in the country, divining dimensions of my environment and what it means to be touched by nature, yet humbled by our inability to control it. Case in point, the unknown series of events that resulted in a deluge of sargassum seaweed washing up along beaches in Christ Church and the East Coast —a hemorrhaging compared to what Barbados has received each year since 2011. Here was an inexplicable increase of the sea’s yield, which prompted the tourism sector to beg Mother Nature for mercy. Swimmers were wishing aloud for a quick return to the pristine beaches and crystal clear waters. Amid the frustration and near panic, the inquisitive Barbadians started asking what long-term environmental benefits could be gleaned from the endless mounds of foul-smelling seaweed. Could the sargassum help prevent soil erosion? Could it enrich agricultural soil as fertilizer?

At the start of our last week, the rain fell like currency from the sky. “Since January!” This exclamation was the outburst we’d often hear from Barbadians as they revelled in the close to a six-month dry season. For me and Powys, the first downpour dampened our mood because we had to reschedule two interviews that day. Any filming outdoors was a no-go. There were reports of flooding in certain areas, and one of our interviewees called to reschedule when her balcony accumulated too much rain water—the same spot she intended to have us set up. As the much-needed moisture soothed the scorched earth, I realized how narrow my perspective was about “good weather.” With the gift of raindrops, moods lifted. Bajans spoke of the daily drenching with appreciation. Again, I had been looking at it all wrong.

My narrow perspective about to change.

Not put out. Bajans took pleasure in seeing their yards, gardens, animals and crops quenched.

Our Hurricane Janet chase was really was about exploring these environmental gifts handed from nature along with the losses reaped. People we interviewed opened their homes to us and shared their gems. When the camera recorded, they spoke almost dutifully of childhood memories and family life, describing how Hurricane Janet fit within the layers of their experiences. After the filming, one host offered us freshly squeezed lemonade, compliments of the trees in her beloved yard. Days before leaving, we received a warm loaf of home-made coconut bread from another host. She surprised us the week earlier with the most scrumptious zucchini bread I’ve had in years. Another interviewee invited us back to her home for tea, and on that occasion she handed Powys two mangos picked from a tree in her garden. 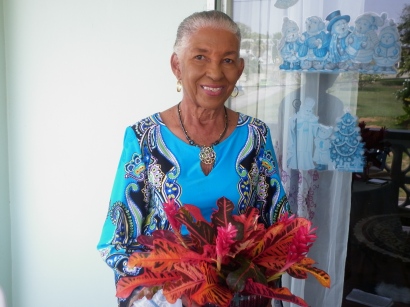 Anita Daniel with a gem from her lush garden. 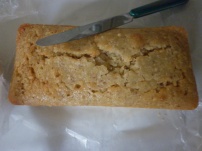 The spirit of generosity was also present within the country’s institutions and businesses. Sitting at Barbados Government Information Service, we reviewed silent, black-and-white footage of Hurricane Janet’s aftermath. In it, forlorn Barbadians sifted through debris. I was reminded of the weakness of our constructed environment. The displaced families living in schools for weeks on end revealed a disturbing reality about the impact of a Category-3 hurricane on the economy. As Tara Inniss of UWI’s history and philosophy department explained on camera, a natural disaster like a tropical storm exposes “the deficiencies” in a country’s infrastructures. In Barbados sixty years ago, those vulnerable spots would be found in housing, fisheries and communications, especially involving hurricane preparedness.

To be standing in the sea’s rolling waves today, indulging one’s senses in the sweet juices of a much-revered fruit, is not a bad indoctrination at all. It conjures that heady spell we fall under, gazing at our environmental geography in all its beauty. Such exquisite gifts of nature often have us assuming they will always be there independent of humankind’s interference or incompetence. But times are cyclical in nature. During an economic downturn it becomes even more important to cultivate, protect and preserve our environment with the respect it deserves, and inevitably demands, as Barbados learned late September in 1955.

I did indulge in my gift of a mango picked from a yard tree. But instead of the sea, I sat eating my fruit on Fresh Milk’s studio platform minutes before we started a workshop on writing. It was my private moment to receive and give thanks. There on farmland, I got to pass my own rite—forever touched by the countryside’s warm breeze and cacophony of earthly melodies.