Fresh Milk resident artist & writer Sonia Farmer shares her second blog post. Although she came to Barbados with a specific project in mind, she has found herself drawn to a new idea based on a book in the Colleen Lewis Reading Room collection – ‘A True and Exact History of the Island of Barbadoes’ by Richard Ligon, originally published in 1657. Using a method of  found poetry called erasure, she is responding to the text by identifying words and phrases that stand out to her, changing the meaning and context to create an entirely new piece. She also hosted day two of her book-binding and design workshop ‘The Art of the Book‘. Read more below: 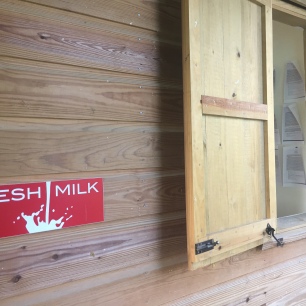 “I found myself a stranger in my own Countrey.”

That line jumped out at me as I combed through the book, A True and Exact History of the Island of Barbadoes by Richard Ligon pulled out of the Colleen Lewis Reading Room library by Annalee when I asked if she had any old local texts. I had planned to use it for an erasure exercise in my first class, which I did, but immediately became obsessed with creating my own response to the book. I could see a new poem emerging from the strange story told from an Englishman’s perspective in the 1600s. Putting aside the project I had planned to focus on in my time here, I’ve allowed this new endeavor to drive my inspiration for the time remaining: an erasure called A True and Exact History, gleaned from this delightful account.

An erasure, as I explained to my students, is the act of removing words from an existing piece of text in order to create a new poem. I’ve always admired the method, specifically in the brilliant ways writer and artist Jen Bervin has used it, but didn’t explore it much myself until a few years ago. I’ve found more and more that I enjoy using one part erasure, one part found language to drive the content of my work—not because I find it difficult to use my own words, but because I love the challenge of such an exercise, finding new narratives from often outdated accounts to construct a contemporary response. I also enjoy using language against itself and out of context to bring attention to its disparities and contradictions.

I used this method a few years ago to form the collection of poetry in ‘Clipping Feathers’, taken from newspaper stories surrounding a major event in Bahamian history shortly after our Independence. With the fantastical narratives I constructed out of sensationalized accounts, I found a way to address the lack of contemporary Bahamian history studies—since, like me, many young Bahamians may not even know about this groundbreaking event, we are left to create our own fictions, a dangerous place from which to glean our national identity. 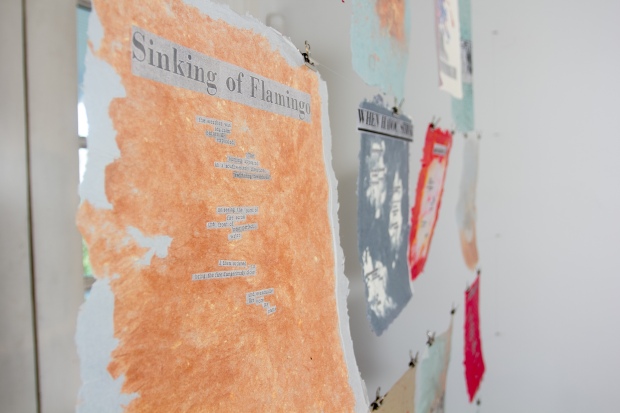 I’m coming from a similar place of ignorance with A True and Exact History. Purposefully, I am not “reading” the text as I seek out its underlying narratives. I also don’t yet fathom how important it has been in Bajan history, though through informal conversations with Bajans, I am starting to get the picture. I did read a little bit into Ligon’s background, finding that he arrived in Barbados late in his life after political upheaval in his home, built a sugar plantation, and then wrote this book in jail upon returning to England from Barbados. I don’t want to research too far, however, holding myself back so as not to directly influence my exercise, not yet anyway. The reason is because I want to be an explorer here in an unknown territory—as I am in these new surroundings. I’d like the narrative to form organically out of that experience. 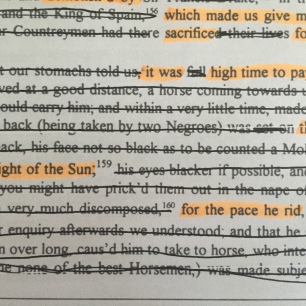 The resulting narrative so far has been exciting to me in its abstracted exploration of emotional landscapes. I had said before that as a person from the Caribbean, visiting other islands in the region is an exercise in magical realism. This new poem is helping me to explore that and deconstruct it. After all, what does it mean to write a “True and Exact History” of anywhere or anything or anyone? How conceited is that? Recognizing the importance of this text is necessary, but not without the lens of colonialism and privilege. With his own biased eye and with centuries between its inception to now, the text is strangely poetic even at its most problematic moments. It’s a gorgeous text to explore and consider, and I hope it yields an interesting result by the end of my stay. 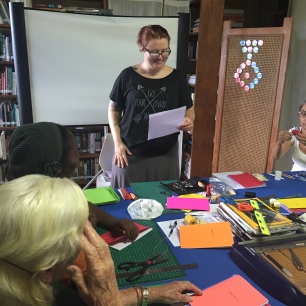 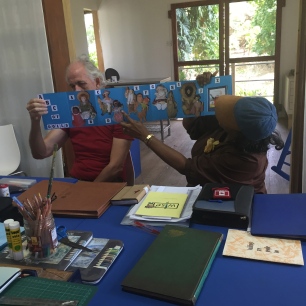 Week two of my Art of the Book class found us exploring the wonderful world of chapbooks, small presses, and simple sewn binding structures. I gave everyone a crash course in chapbook history and highlighted the work of a number of small, independent presses. Then we reviewed some student projects completed at home using last weeks’ structures and writing challenges. All I can say is I’m one proud teacher! The books they’ve made are awesome, fully engaging with everything these structures have to offer to their individual narratives. 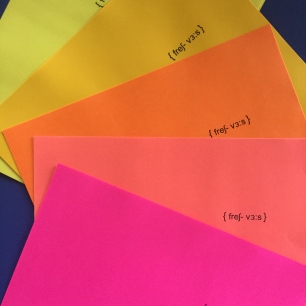 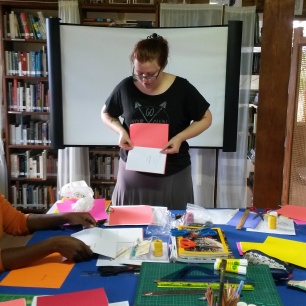 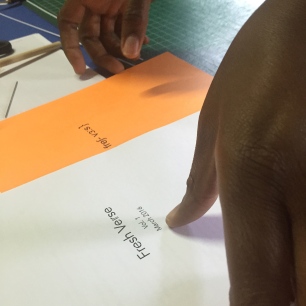 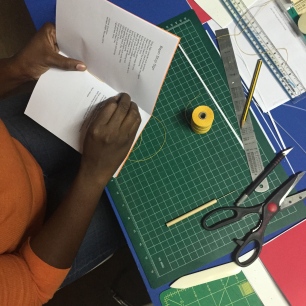 Then we got to work on sewn structures, including the Japanese stab-binding and pamphlet stitch. In order to register for the class, students had to submit a poem of their choice. I gathered these into a simple chapbook called “Fresh Verse” and also made us a special press name, “Fresh Chaps,” under which we made twelve copies—one for every contributor, and two for the Colleen Lewis Reading Room itself. So by the end of the class, everyone got to bind a limited edition anthology of class poems. Who knows, maybe there will be a volume two someday? 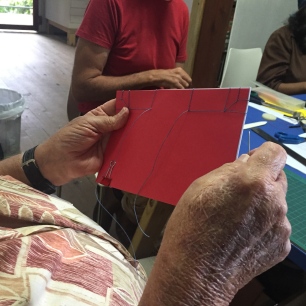