Fresh Milk is excited to announce that we will have three writers/researchers in residence with us for the month of June, 2019: Bahamian writer and photographer Ethan Knowles (June 10th – July 5th) as part of our international residency programme; Barbadian artist Kia Redman (June 10th – July 5th) as the selected participant in the Colleen Lewis Research/Writing Residency; and Barbadian writer Ark Ramsay (June 17th – July 12th) as the sponsored participant in this year’s ‘My Time’ Local Residency Programme.

Ethan Knowles is a writer and photographer from The Bahamas. His work, largely tied to the islands of the Lucayan archipelago on which he grew up, aims to decolonize and sensitize, paying particular attention to topics of cultural erasure, environmentalism and identity in the Caribbean. After completing his high school education in Nassau, he spent two years in Italy at the United World College of the Adriatic and graduated with his International Baccalaureate diploma in May 2018. He is now enrolled at Colorado College in the United States, working part-time as a photographer while pursuing a bachelor’s degree in English with a minor in Italian. Over the past few summers, he has published writing on tourism, culture, and neocolonialism in The Nassau Guardian, worked as a curatorial attaché for and exhibited at the National Art Gallery of The Bahamas and, most recently, been awarded the James Yaffe Prize for Short Fiction by the Colorado College English Department for a story set on the Bahamian island of Eleuthera. 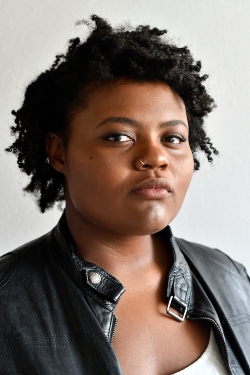 Kia Redman is a creative professional living and working in Barbados. She attained her BFA in Studio Art from the Barbados Community College where she received an award from the Lesley’s Legacy Foundation for the highest GPA.

She has worked as a scenic painter for Operation Triple Threat, taught video marketing at the World University Service of Canada Caribbean, participated in an open studio residency with Punch Creative Arena and taken part in local group shows and screenings internationally. In 2018 her short film Roots|Routes won six awards including Best Short Film at the Barbados Visual Media Festival.

Kia currently works as a designer and videographer for Acute Vision Inc. and Bajans in Motion Inc. whilst cultivating her creative practice.

Being born into a post-independent nation in formation, Kia’s work focuses on issues of identity, defining culture and documenting histories. She aims to rewrite the blanket definition taught to be her Caribbean identity and discover the things unique to her lived experience.

Ark Ramsay is a 25-year-old Barbadian writer, currently completing an MPhil in Chinese Philosophy at Fudan University in Shanghai. Their short fiction has been published in Small Axe (50) in 2016, after winning that journal’s emerging writer’s contest. Ark’s writing is centered around queer, Caribbean identities and coping with the reality of a warming earth–the fragility of an island ecosystem that cannot fight back.

Ark will begin an M.F.A in creative writing at Ohio State University in the Fall.