Martinique based historian, art critic and independent curator Matilde dos Santos, who was one of the guest curators/mentors selected to conduct studio visits with 6 of the 24 CATAPULT Stay Home Artist Residency participants, has generously offered to write features on each of the artists she engaged with during the programme. The third piece focuses on the practice of Jamaican artist Camille Chedda!

Last August, Fresh Milk (Barbados), Kingston Creative (Jamaica) and The American Friends of Jamaica (USA) introduced CATAPULT | A Caribbean Arts Grant. This program, through six different initiatives, directly provided financial support for five months to over 1000 artists and other Caribbean creative practitioners confronted with the COVID-19 pandemic. One such initiative was the Stay Home Artist Residency (SHAR). Twenty-four artists were chosen, and the residencies spread out over three groups from September 21st to December 11th. I was lucky enough to be one of the visiting curators, and am pleased to share these virtual visits with you.  Each meeting brought me something different; each artist moved me in their own way. I was particularly pleased to meet Camille Chedda, whose work I knew only through photographs.

Camille Chedda, Untitled, 2020, Installation on view at The Olympia Gallery, Kingston. Photo by Charles Allen. Courtesy of the artist.

Camille Chedda (Manchester, Jamaica, 1985 ) lives and works in Jamaica. She is a Visual Arts graduate of Edna Manley College and holds a Master’s degree in Fine Arts from the University of Massachusetts at Dartmouth. Her work is polymorphic and questions the post-colonial identity. Using materials from everyday life, she traces the decomposition inherent in all construction, notably in the perpetually ongoing construction: identity; her own personal identity merged with a possible Caribbean identity. Her works have been exhibited at the National Gallery of Jamaica, the Museum of Latin American Art, the Portland Museum of Art, and at the Wallach Art Gallery at the University of Columbia, among others. Recipient of numerous awards, such as the Albert Hume prize, the Reed Foundation scholarship, the first prize in commemoration of Dawn Scott, and the TAARE program prize from the British Council, she was also a resident artist at Alice Yard in Trinidad and Tobago, Art Omi in New York and at Hospitalfield in Scotland. A teacher at the Edna Manley College, in 2016 she became the director of the artistic and social project InPulse Collective, financed by Rubis Mecenat to support young Jamaican artists.

I was familiar with Camille’s paintings on plastic bags, such as Shelf Lives (2011), where she painted in acrylic a whole series of mini portraits of ordinary people on transparent plastic bags.  These portraits on disposable bags produced the disturbing sensation of lives also being disposable, expressing, in a simple yet highly effective way, the little value that can be given to the lives of the most precarious populations. I left Brazil a long time ago, but Brazil never left me, and everything I see reminds me of my country. That is surely why these characters, drawn with a few simple strokes, ready to be used and replaced, upset me so. On the same support, the artist created Wholesale dégradable, a series of portraits of people who have been killed by Kingston police, taken from official statistics and drawn from photos. Some of the characters, those for whom the artist could not find any photos, were replaced by other acts of violence, not necessarily current or Jamaican. In this way, the artist established a link between actual ordinary violence and the systemic violence of colonial history. There too, I can’t help but explain recurrent police brutality as a product of colonial history perpetuating itself.  The idea of a throw-away society is accentuated by the evanescence of the portraits evoked in Built-In obsolescence. Acrylic paint on plastic can break up in pieces, and this allowed her to play with time, notably with the notion of the expiry date.

Another material very present in her work, the one she will use while in the CATAPULT residency, is cement blocks or cinder blocks. Depicted on carbon drawings in the series  Drop it low, 2016, these blocks refer back to videos that went viral in Jamaica in 2015 showing women lying on the ground on their backs during dancehall block parties, breaking cinder blocks between their thighs. Dancehall is often presented as a place for women to liberate themselves; but, these videos depicted mainly simulations of violent sex and women earning small change from the public for displaying their talent for breaking concrete blocks with their crotch, talents that can lead to serious health problems. For a black woman in Jamaica to criticise dancehall is not a comfortable position; but, it is the one Camille chose to take by showing her drawings of a woman destroying herself only to please others. And when we speak of self-destruction of black bodies, coloniality surely has something to do with it. Cinder blocks were also present in the installation Rebuild, shown at the Ghetto Biennale 2017 in Haiti. The piece referred back to the destruction of the city of Port-au-Prince in 2010 and its rebuilding still in progress, but also to the fragility of cement blocks, generally believed to be resistant but made fragile by the greed of manufacturers who put sub-standard blocks on the market. Such imitations were probably implicated in the destruction of Haiti by the 2010 earthquake. This material has accompanied Camille since 2016, and recently, on the Net, I saw her photos of body parts buried in a sea of sand and cinder block. I very much like the idea of construction/deconstruction and the link the artist makes with the body (and indeed the spirit, which she does not state, but very well could have). 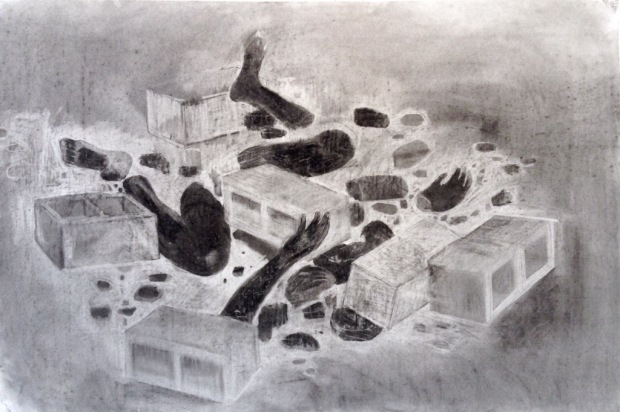 For her CATAPULT residency, Camille chose to work with a stack of cinder blocks, a work that I discover at its very beginnings and which will develop quickly, to be shown first in a collective exhibit “…And I Resumed the Struggle“ at the Olympia Gallery, in Kingston from December 10th. The work, in its current state, was entirely done in the framework of the CATAPULT residence, also with the support of WARE (The Wattle and Red Earth). At the time of the visit, the piece was still in the early stages, and it’s still a work in progress.

In this work, Camille wanted to explore the notion of heritage in decolonial terms. The artist sees heritage as a sort of construct, an exogenous gangue totally oriented towards tourism and that does not consider (nor honour) the black population, which comprises the majority of the Jamaican population.

The origin of the piece goes back to 2019, but the actual making of it began last October. This piece is to be considered in association with The Three Disgraces, a collage from 2019, showing a wall being climbed over, at the same time blocking out three dancehall dancers, surrounded by images of money, the public, and children. According to the artist, these children are exposed to something presented to them as their culture and heritage. Starting from the idea of the wall and heritage, Camille began to conceive her new piece about the social construction of identity.  The cement blocks are stacked into a wall, and the openings in each concrete brick are filled either with tablets playing videos or with photos or objects… When seen from far away, it gives the impression of a tower of apartments from the outside. This evokes, simultaneously, the notion of construction and compartmentalisation, foundation and immuration; the raw finish and the unfinished assembly imply construction, the small occupied nooks, and the visible defaults suggest a ruin. This all made me think of the popular song by Caetano Veloso: “Here all seems to still be in construction but it’s already a ruin.” Caetano was speaking of Rio de Janeiro, but it is reminiscent of Camille’s work. Ruins under construction. A construction that breaks down in the very process of being constructed. More than programmed obsolescence, a sort of denaturalisation; where the foundation of ruins, that which builds, demolishes; that which elevates, cuts down.

During our conversation, Camille, who first wanted to depict the sea at the top of the wall, changed her mind and thought instead to perhaps fill in the top part with photos of heritage buildings, notably Rose Hall, an ancient mansion dating from the first half of the XVIII century.  Very imposing, the Georgian style home had been abandoned and fell to ruins in the ’60s, then renovated near the end of the ’70s by Americans who made a museum out of it. This museum displays a story of the plantation and the legend of the white witch of Rose Hall, a fiction. And it is this kind of fictional character who romanticised colonial heritage that Camille would like to question. Built during the pandemic, the piece evolved to give more and more space to screens, which with the pandemic have become practically the only means of socialisation for the confined population. On the theme of social and memorial constructions, the piece made me think of the installation sculpture of Cildo Meireles, Babel (2001). This monumental installation (over 9 meters high) is composed of a pile of 800 radios from different brands and epochs, tuned to different radio stations set at distinct yet hardly audible volumes.  Around the room, a bluish penumbra immersed the audience in the sound of languages from all over the world. I also thought, from having seen it in another CATAPULT program, the Lockdown Virtual Salon, of the piece Grand Crus, appellations contrôlées le retour by Richard-Viktor Sainsily Cayol, which is also a construction based on materials that have built our memory. The work of Sainsily Cayol has two versions, both made of oak barrels organised in pyramids placed on a triangular base under blue light. The first version (Dakar Biennale, 2014) presented barrels marked “compagnie des indes,” and on which are also engraved various names of African ethnic groups.  In the second version (Havana Biennale, 2019), unmarked barrels are bristling with prickles. 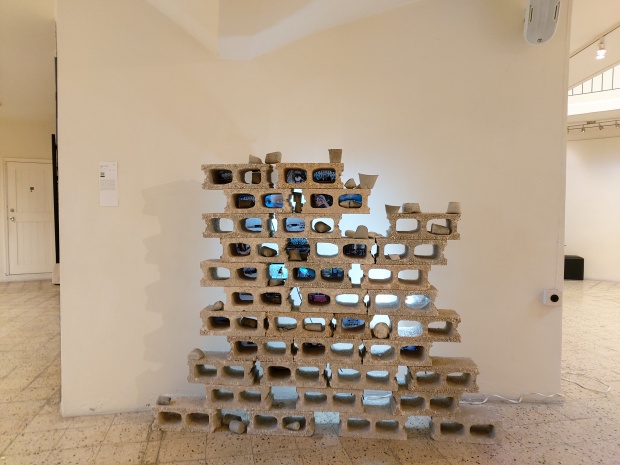 Because memory is also a construction, sometimes with blocks of bad quality, Camille made me think of  Cahier d’un retour au pays natal, where Aimé Cesaire praised  those who have never invented or tamed anything. Perhaps we are not builders of cathedrals, but we do build, never-the-less.

Appreciation to the partners of the CATAPULT programme: The American Friends of Jamaica, Kingston Creative and Fresh Milk.

The SHAR participants described their experiences in blogs that you can read on the Fresh Milk platform here.

On Grands Crus versions 1 and 2,  see the artist’s website: https://sainsily-cayol.com/