Fresh Milk board member and contributor Natalie McGuire shares a review of the recent exhibition The Place of Silence at the Stal Gallery, Oman. While this show featured work by Middle Eastern artists, McGuire parallels their work with that coming out of the Caribbean, particularly between Iraqi-British artist Estabrak Al-Ansari and regional artists Nadia Huggins and James Cooper, all of whom deal with the materiality and implications of water as a medium. Read more below:

Not work, taut, deaf, monotonous as a sea, endlessly sculpted—but
eruptions yielding to earth’s effervescence—that expose the heart, beyond
worry anguishes, to a stridency of beaches—always dislocated, always
recovered, and beyond completion—not works but matter itself through
which the work navigates—attached to and quickly discarded by some
plan—first cries, innocent rumors, tired forms—untimely witnesses to this
endeavor—perfectly fusing as their imperfections meet—persuading one to
stop at the uncertain—that which trembles, wavers, and ceaselessly
becomes—like a devastated land—scattered.

– Edouard Glissant, Poem for the World

Standing in the Stal Gallery, Muscat, in March 2015, the exhibition The Place of Silence exhumed an atmosphere so familiar to that of Caribbean art spaces. The works of six Middle Eastern artists commanded attention in the three enclave-spaced gallery, saturated in context and concepts that brought to mind Glissant’s phrase: “Not works, but matter itself through which the work navigates.” From Dada-inspired installations reviewing existence and death (Raiya Al Rawahi’s Life, Being and Death) to an unearthing of self-reflection, a photographic self-portrait mirrored and repeated almost to geometric abstraction (Ahmed Al Mullahi’s Gazing Through the Divine), there were challenging thoughts and narratives seeping through every pore of the walls. The exhibition was physically navigating through the matter of an upscale avenue in the heart of the city, sitting on Al Inshirah Street, a British Council Service Road. 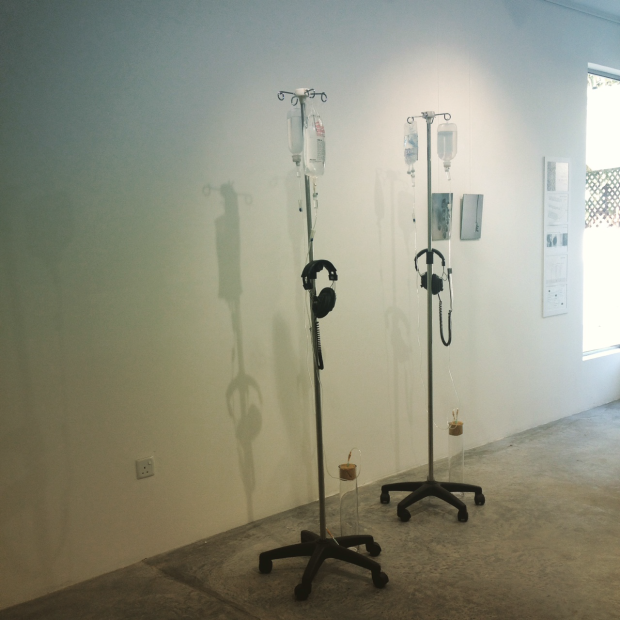 One in particular was the piece Sayed, a component of the series ‘Omani’s Under Water’, by Estabrak Al-Ansari, an Iraqi-British new media artist and filmmaker, who is currently at the centre of a surging movement in Omani contemporary art. The photograph depicts an underwater view of half the figure of an Omani man in his dishdasha, submerged and poised on the reef. The white gown plays with being transparent in the sunlight that penetrates the water, and clings to the backs of his legs and lower torso. In the accompanying wall text, Al-Ansari emphasized her exploration of “taboo concepts such as sexuality, privilege, oppression, power and understanding.” By having the body of her subject submerged in water, in this realm of nature that becomes somewhat abstracted from the landscape of society, she can unpack the restraints around its presentation and movement. Implementing her concepts ‘under the surface’, the discourse she wishes to raise is mediated by this matter. For Sayed, no conservative Omani could accuse Al-Ansari of presenting him in an immodest manner; it was a natural reflection of the current of the ocean she photographed him in. She later stated, “I might direct a person, an image with my camera, but natural elements like water take over, and the element of the water plays with what I want to convey.” 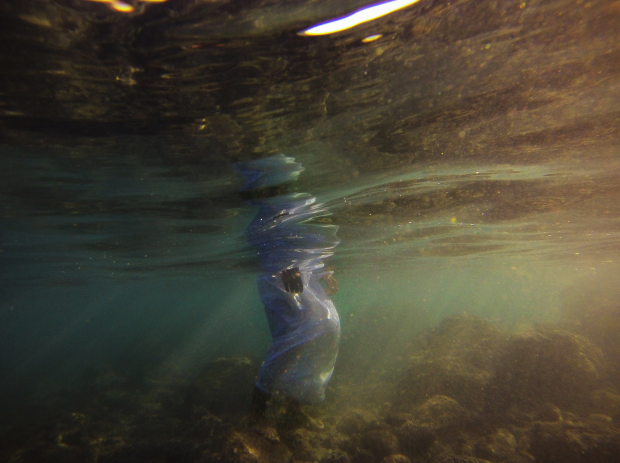 I had a chance to visit Al-Ansari at her sea-front studio in Al Bustan, and as she shared with me her thoughts about functioning in a Middle Eastern creative space, the familiarity of her new found artistic community with that of my own Caribbean one was undeniable.

Being her first exhibition in Oman, Al-Ansari believed some movements of the body encompassing a relationship with the sea would be acceptable for display outside of the water. At the opening of The Place of Silence, she presented her live projection painting piece Djinn and Motion. She explained:

Djinn is huge here. It’s in the Qur’an and states that Djinn do exist, it is like the ‘other’, a spiritual world. In countries there can be voodoo, and in Oman there is a big history of that. One reason why the title Djinn and Motion came to me is because I live by the sea within the mountains…and I have friends who refuse to visit me, because the belief is that the Djinn prefer to chill out by the sea, especially at night. Whether or not you believe in it is irrelevant, to me this is all myth and story, and this is the part I enjoy, that has been translated in all of my work.

Live projection painting originated in Al-Ansari’s London work with the group Thre3 Strokes, and stemmed from a desire to connect oneself and one’s viewers with an alternate space of reality. And although response to the medium was positive, the Muscat-based audience had difficulty accepting the title Djinn and Motion. Al-Ansari elaborates, “I had an interview with a guy from one of the newspapers here who was fine with discussing Omani’s Under Water, but as soon as I talked about Djinn and Motion he refused to talk to me, he walked away. He didn’t want anything to do with it. It was weird because for me, I was just normalizing what is here and what people talk about.”

This notion of making visible submerged cultural discourse via the physical matter of water resonates strongly with the Caribbean. Geographically, we grapple with the ocean being both a cushion on which our islands are nestled, and the boundary that encases our sense of isolation. Socially, the ocean is an escape from the physical restraints on our bodies to act a certain way on land, to ‘behave’, to comply with conformities. The trauma of the Caribbean landscape resounds loudly in contemporary society, where the water is silent.

Nadia Huggins’ series in progress ‘Fighting the Currents’ is a probe into this, often using her own body submerged in the water. At the recent Small Axe Caribbean Queer Visualities symposium at Columbia University, Huggins spoke of how bodies become different in water, stripped of social meanings in their movement, being solely an interaction with the matter of water they encounter. Her works are almost a confrontation with landscape boundaries, a contemplation of island isolation. 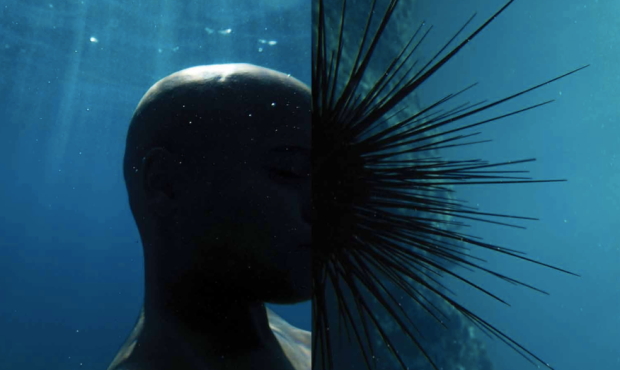 Nadia Huggins, Transformation II from the series ‘Fighting the Currents’ (Work in progress).

In the work Transformation II, the reef is repositioned, interrupting Huggins’ narrative with the ocean. At the centre of the image the line of separation between face and sea urchin is blurred. The more one looks at the void, the more details in the form are projected – facial features appear, and instead of seeming to become engulfed by the urchin, there is a moment of calm connection portrayed. The body, floating, rests on the boundary.

James Cooper’s work also presents an encounter between human bodies and bodies of Caribbean water. Cooper positions his subjects as physically bound to the sea they float in, whether by (un)recyclable materials chaining them down, or their own bodily fluid. In other works, parts of the oceanic ecology engulf the subjects entirely, a reverse role of humans consuming nature. Some are masked in an underwater sand cloud; others drown in an eruption of bubbles. Cooper dramatizes ecological relationships and pauses on the undeniable consequences co-habitation of human and marine biology generate.

It could be argued that the physical currents pushing against bodies symbolize social currents pushing against the conversations that Al-Ansari, Huggins and Cooper’s works insinuate. However it is the water itself, the matter, that receives discomfort in the presence of the body. If the water then is an isolation from the boundaries of land, these works are conveying art as a disruption of societal matter(s) to bring to the surface necessary discourse.

Speaking about the contemporary art community in Oman, Al-Ansari stated:

You have so many young artists who want the opportunity to understand, to educate, to just express, and the problem here is limitation. You have just a few galleries and unfortunately, you have a lot of voices who currently can’t be heard or are too afraid of being out there. I don’t know what it is. But I wouldn’t say it’s supported like it is in the UK. The public projects you see here are like the gold cups randomly placed at roundabouts. That’s as far as public art goes. It is very limited, but at the same time maybe that’s part of the excitement of being here, because it’s almost like an untouched treasure. There are so many places to absorb and also it’s nice to be part of a movement that you’re trying to help take off. And it will take off, for sure.

In both the Caribbean and Oman, contemporary art is continuing to develop understanding via boldly accessible platforms for critical thinking. Whether it’s Fresh Milk in Barbados, Alice Yard in Trinidad, Small Axe in New York, or Stal Gallery in Oman, these spaces are going beyond traditional hierarchies of learning and social conversation, and towards a community of practice. In addition, they are modeling an ethos of intra-regional exchange for creatives. To mediate this, however, is often a process of necessary discomfort, a matter that should be embraced to continue in a global mind-shift around contemporary art. “When you’re comfortable,” Al-Ansari agrees, “it’s difficult to move. And people are very comfortable here.” 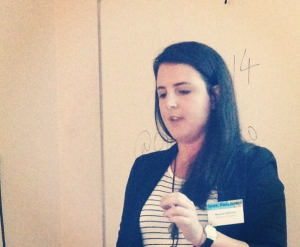 Natalie McGuire is a Barbadian Art Writer who has recently completed her MA at The University of Auckland, with a thesis deconstructing Caribbean diasporic representation in museums. She is on the board of the Fresh Milk Art Platform in Barbados, and has regularly contributed to ARC Magazine as well as AICA Southern Caribbean.